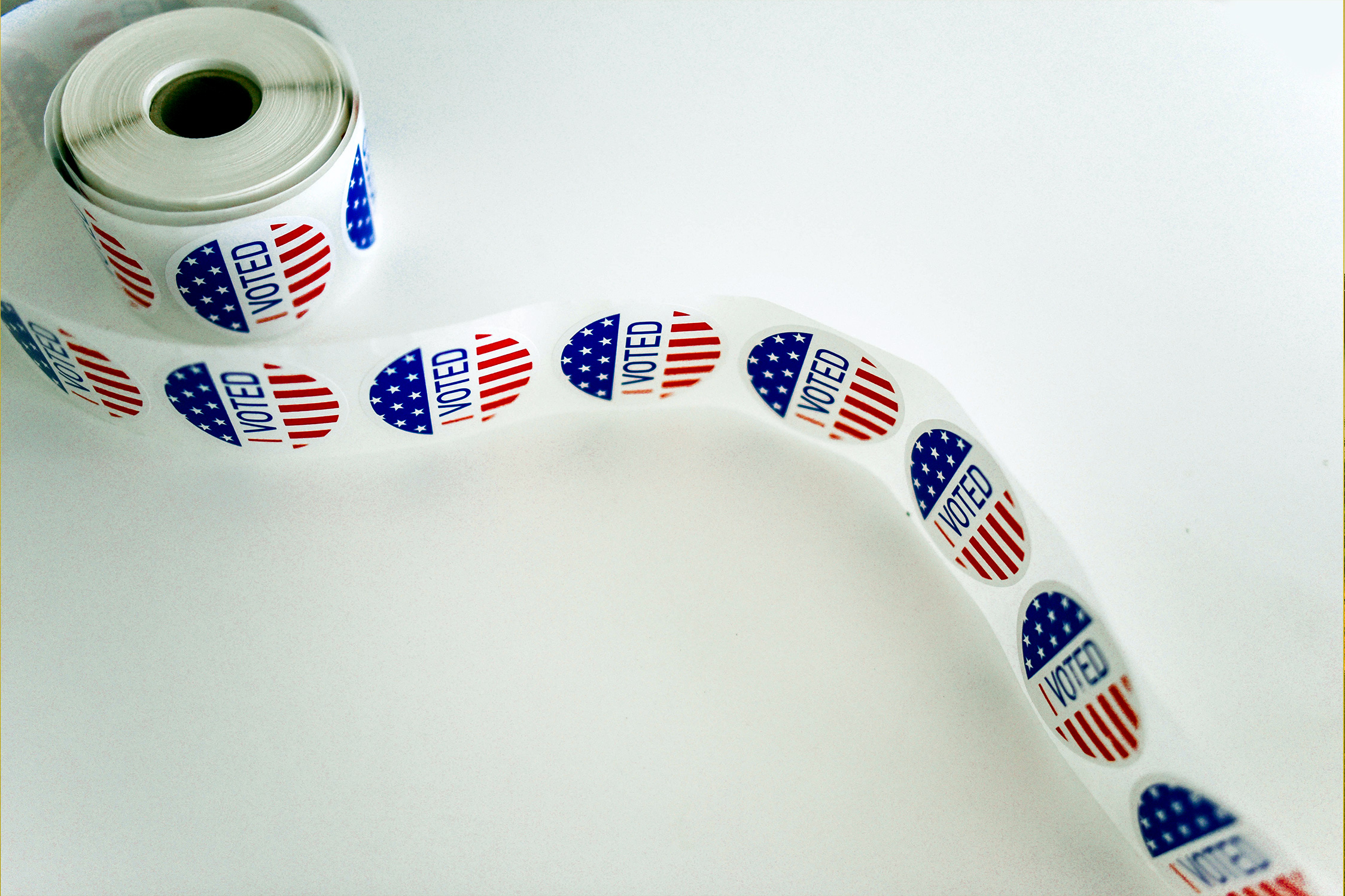 Earlier this week, we at RELEVANT ran an excerpt from a new book by Cameron and Stuart McCallister on a healthy Christian posture for the upcoming election. The piece connected and left a lot of people wondering about what that might look like on a practical level.

One way to get that question answered is to pick up the McCallisters’ book Faith That Lasts and read more of their argument. But we also thought we’d put in a call to Michael Wear, a former staffer for President Barack Obama who founded a consulting firm called Public Square Strategies LLC to help businesses, non-profits, foundations and Christian organizations navigate the tensions between faith and politics. Here are some of his thoughts about what direction politics is heading in the U.S. and how Christians can resist the tide towards defining themselves in terms of their political beliefs.

We ran a piece on how Christians should be politically engaged without putting their hope in politics to save them. But how do you actually do that?

Politics has become an even more prominent cultural force. When politics becomes a cultural force, it provides a venue for self-expression, self-affirmation and a source of community that can ultimately divert politics from its right and just aims.

The problem is not that we take politics too seriously, but that we take it seriously in all the wrong ways. Well, let me point you to a story about political hobbyism, and this idea that folks can be spending hours and hours watching political clips and getting into political debates on Twitter and putting out all of this political information and feel like that’s civic engagement, but it’s not. It’s politics as entertainment, it’s politics as a forum for presentation.

How would you define politics in a way that is actually useful and beneficial? Where do you feel like that definition gets loose with what you call hobbyists?

Politics is about the art and form of governance. It’s how we govern ourselves as a people. It’s about the distribution of goods as a community. Now, of course, that has always brought in questions of identity but because of increasing sophistication of political technology and because of the brand-oriented way our culture is now, there is an increasing temptation to view politics as something more akin to a team sport. You have your team you root for and you really don’t care about whether the team deserves to win, or if your team really has the best case on their side. You just care about your team winning.

To the extent that this crowds out concern for the common good, that’s a negative thing. We see this from our political leaders quite often.

I thought the debate was pretty evident of this time of politics as a form. But it’s also important not to put all of the burden on our leaders. Our politicians are responding to the incentives and disincentives that we, the people, place into the system. If we weren’t going to politics looking for that self-affirmation and looking for politicians who express themselves in ways that riled us up and fed into that emotional, psychological state of being, rather than politicians who seem to have a positive contribution to our political life, then that’s what politicians are going to respond to. We can’t constantly demand statesmen and stateswomen to act as statesmen and stateswomen consistently if we’re consistently undermining those who act in that way as voters and as citizens ourselves.

How can we do as Christians do a better job of rightly ordering politics in our life? What does it look like to put politics in its proper place in our moral, spiritual and civic lives?

But the resources are there. Some of these resources include what the Catholics call the preferential option for the poor, which can be found in other Christian traditions, which is basically just this idea that we care for everyone as Christians in our personal and private lives, as well as in public life and how communities are organized. But we have a special ear, special attention for how policies and how political debates affect those who are most vulnerable. That comes from our faith and that’s resourced not just by the example of Jesus, which is obviously vital. Not just by the justice admonitions of scripture, but it’s also a resource by the fact that we find our security in Jesus.

One of the things that we’re seeing in our politics right now is that people are running to politics to maximize the sense of security they feel, which to some extent we want people’s rights secured, we want the government to treat people fairly. But there’s a distortion that takes place if you view politics primarily as the place in which you secure your own personal rights. That is not a Christian way of thinking about things.

Another set of resources is the fact that we are part of a body, which ought to give us an attentiveness to those in different stations than we are and a built-in sensitivity and community that breaks outside of tribe and socioeconomic status and whatever other interest group politics tries to put us into. Our faith resources a sense of commitment that we have to people who are not like us, the people who face challenges that are not our own.

I’ve referred before to Paul’s admonitions in Galatians, when he’s writing to what is essentially a polarized community. He doesn’t tell them, “Here’s a great power sharing agreement so that you guys get to pick what we’re eating on Mondays, Wednesdays and Fridays and the other half gets Tuesday and Thursdays.”

Instead, he tells him, “Jesus is calling you to carry one another’s burdens, and in this way, people will know that you have the love of Christ.” We have the resources in our faith to carry that perspective into our politics rather than one of self-interest and self aggrandizement.

Liz Bruening tweeted that “The Christian faith will always be a barely comprehensible stranger to any earthly philosophy of politics, because all of them are at heart devoted to the satisfaction of libido dominandi.” Agree or disagree?

You won’t be surprised to hear that I think that’s exactly right. Jamie Smith at Calvin offers this idea that when Christians enter into political civic life, their involvement ought to be what Jamie refers to as “tinged with a level of ambivalence.”

That ambivalence ties directly to what Liz is saying, which is that after assessing and learning and discerning, we may have ideas about what policy or political approach is best for our neighbors. We may be going into politics with the idea that this is what’s for the common good. This is what’s for the best of my neighbors.

But we know from history that the history of public policy in this country and every other is a history of unintended consequences of good motives leading to bad outcomes.

As C.S. Lewis writes in the opening of his chapter on politics and Christianity, scripture does not offer a particular political program. In other words, you won’t find in scripture the ten points of a political platform that is God ordained. Scripture offers principles, lessons, values and ideas that should be applied by Christians in their time, in their place, in a way that is discerning with the moment and with the context and with history. But politics for Christians is the translation of ultimate things to the penultimate, of timeless truths down to the prudential. We understand that, as Paul writes in Corinthians, we see through a glass darkly. That translation work that we try to do as best we can but we know how imperfect that is. Even those issues where we feel most strongly, our activity is tinged with ambivalence.

Now, what that means practically is that there are some tools in the political toolbox that we don’t use. For instance, denigrating the humanity of our political opponents or willfully misleading people in order to get our way. They’re tools we don’t use. Because, for Christians, faithfulness is not just the means. It’s the end. You can’t reach the end of faithfulness through unfaithful means. If you try and do that, the end will be unfaithful. There is no such thing as a faithful end that’s reached through unfaithfulness. That’s something that Christians can bring to the public square.

How do we distinguish between earthly good and eternity? How do we relegate certain actions to this realm and not to the other?

For people who are tempted towards disengaging altogether and just not caring anymore, what do you say to them?

I say this tenderly and with great sympathy for that feeling, because I feel it too, but in a society like ours, in a democratic system of government like ours, withdrawal does not reduce culpability. Disengagement does not reduce culpability. As a citizen, you already hold a political office. You literally do not have the choice. In the United States of America, you don’t have a choice but to have a certain level of political influence. The decision we as Christians have to make is what will we do with that influence and how we best steward that influence for the flourishing of our neighbor?

We are not held accountable for everything that politicians do, because we don’t dictate what politicians do. What we are responsible for is what sort of urgings and impulses are we putting into the system with the limited influence we have? What is the intention of your vote? What are you trying to accomplish? Who are you trying to help? What vision of the flourishing of society are you trying to advance, understanding that you’re choosing between options that were not chosen directly and solely by you?

Jesus understands that. And, of course, voting is the only way of civic participation. When you’re protesting, what does your protest say about your vision of the life that Jesus is calling us to? When you’re posting on Facebook and Twitter, the same thing. We all get things wrong. We’re all imperfect. We’re all striving to be more faithful. But this is the way Christians ought to be thinking about political life. This is the way Christians, frankly, ought to be thinking about all of life. How do we steward the influence and the places in which God has placed us so that we can follow Jesus and act as Jesus would act if he were us, in the position that we’re in?

You can pick up a copy of Michael Wear’s latest book Reclaiming Hope: Lessons Learned in the Obama White House About the Future of Faith in America here.

The Avett Brothers Are Figuring Out Their True Selves