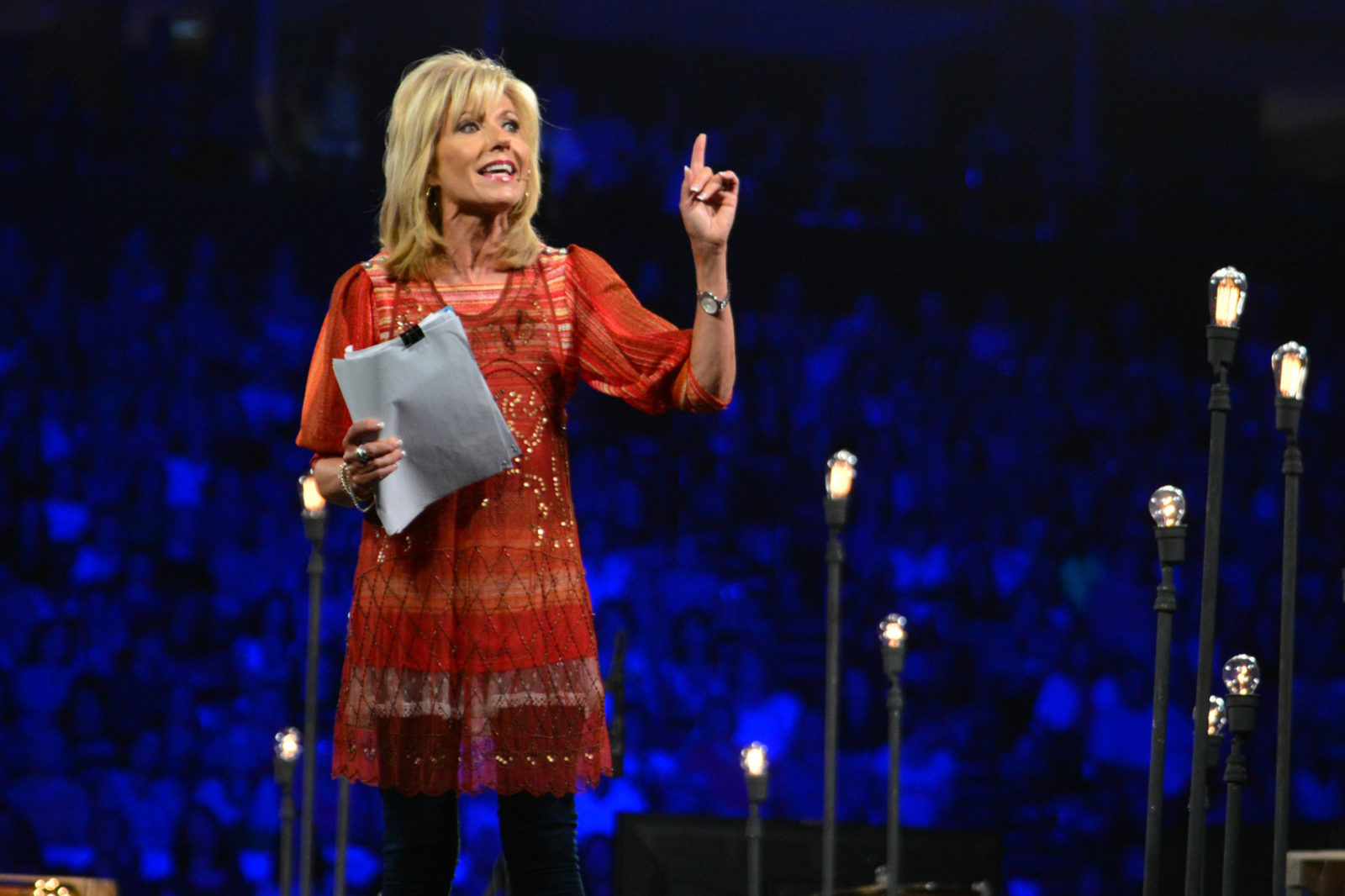 Over the weekend, thousands of aggrieved individuals took to Washington D.C. for a “Stop the Steal” rally, accusing president-elect Joe Biden, vice-president elect Kamala Harris, their allies, the FBI, governors from both political parties, the Supreme Court and state electors across the country of working together to steal the election from President Donald Trump. It’s a nonsense allegation with zero basis in reality, which makes it all the more unsettling just how religious the rally became, thrusting Christian Nationalism into an ugly spotlight. In the middle of all this, author and preacher Beth Moore took to Twitter for the rare social media thread that seemed to actually matter, and flipped the narrative.

“I do not believe these are days for mincing words,” Moore tweeted. “I’m 63 1/2 years old and I have never seen anything in these United States of America I found more astonishingly seductive and dangerous to the saints of God than Trumpism. This Christian nationalism is not of God. Move back from it.”

I do not believe these are days for mincing words. I’m 63 1/2 years old & I have never seen anything in these United States of America I found more astonishingly seductive & dangerous to the saints of God than Trumpism. This Christian nationalism is not of God. Move back from it.

And, God help us, we don’t turn from Trumpism to Bidenism. We do not worship flesh and blood. We do not place our faith in mortals. We are the church of the living God. We can’t sanctify idolatry by labeling a leader our Cyrus. We need no Cyrus. We have a king. His name is Jesus.

Moore went onto caution her fellow leaders in ministry against “remaining passive in this day of seduction to save our own skin” and warn Christians against turning “from Trumpism to Bidenism.”

“We do not worship flesh and blood,” she said. “We do not place our faith in mortals. We are the church of the living God. We can’t sanctify idolatry by labeling a leader our Cyrus. We need no Cyrus. We have a king. His name is Jesus.”

The tweets set off a firestorm across the internet and beyond, sending Moore’s name to the top of Twitter’s trending charts and sparking off conversations around cable news about just who this Moore woman was and, frankly, why she’s the only one brave enough to say this stuff. Theobrogians heads exploded. This morning, MSNBC had conservative commentator David French on to unpack scripture. Tom Arnold proposed to Moore. It is a moment.

This isn’t exactly a new song from Moore, but the lyrics are a little more pointed. Moore has been writing bestselling Christian books since the 1990s, and her Living Proof Ministries hosts enormously popular conferences all over the world. But over the last few years, a new generation has come to know Moore primarily for her fierce courage in the face of the fundamentalist extremism creeping within her conservative Southern Baptist tradition. On social media, she forcefully challenges the misogyny and racism that has plagued evangelicalism with a zeal that makes many “cool” younger prominent Christian leaders look lazy in comparison.

This outspokenness has come at a cost. Moore’s fellow Southern Baptist leader John MacArthur infamously shouted at her to “go home.” On Twitter, various blue check conservative Christian accounts are shrieking at her about patriotism or globalism and a lot more.

In a conversation with RELEVANT in 2017, Moore was frank about how much business she’d lost over her stances and why she continued to speak up despite the backlash.

“The reason I got more vocal was because of the overlap with the witness of the Church and the witness of Christianity,” she said. “Our care with the name of Christ. The message being preached loudly to the world about our values and what we were willing to compromise to get what we wanted. I just found it deeply disturbing: our tolerance for wrong to get what we think is right.

“What I spoke out about was what I found so disturbing coming from my own world. I felt personally about it. This is the evangelical world that I’ve been part of all of my life and served for 40 out of 60 of my years. I’ve never thought that world was perfect, no more perfect than I was or any other individual that was in it. But I would have believed that generally speaking, it was true. What we appeared to be was what we to a large extent were. I think that what hit me with such concern over these last 18 months was that I felt that its most public witness in politics — not all but in some very, very influential areas of evangelical leadership — I felt like the public witness of it seemed to be dishonest. I know that’s saying a lot. It seemed to me that the candidacy was not represented as a quandary. It was represented as a long-awaited victory.

“I had concerns for the people of God that we were being sold something that wasn’t so,” she continued. “It wasn’t what it was painted to us. I found it deeply disturbing.”

Moore has been pretty quiet since her Twitter thread went wild. On NBC, Morning Joe host Joe Scarborough said that she had declined an invitation to speak further on her thoughts. But then, after her weekend on Twitter, it’s clear Moore doesn’t need any help amplifying her message.