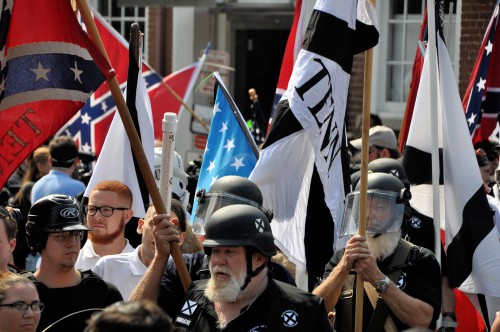 A broad coalition of inter-faith groups and civil rights organizations is asking to meet with the director of the FBI to ask for increased scrutiny of white nationalist groups. In a letter from current FBI director Christopher Wray, the groups argue the threat posed to religious and racial minorities by white nationalist groups justifies a meeting to discuss a more active response. [h/t Religion News]

The letter was signed by groups like the Muslim Advocates, the Union for Reform Judaism, the NAACP Legal Defense and Educational Fund, the Leadership Conference on Civil and Human Rights and the Sikh Coalition. No Christian groups signed the letter, though it’s not clear whether any were asked.

“We, the undersigned national civil rights and faith-based leaders, write to express our deep concern regarding recent attacks against our houses of worship and communities,” the letter reads. “We request an urgent meeting with you to discuss the role of the Federal Bureau of Investigation (FBI) in addressing the threat to public safety and our communities by white nationalist violence.”

The letter references a few recent mass shootings that took place in houses of worship, like the shooting that left six Sikh worshippers dead in Oak Creek, Wisconsin, the shooting at the Emmanuel AME church in Charleston, South Carolina that left nine dead and the Tree of Life Synagogue shooting in Pittsburgh that left 11 dead. In all these cases and several others, the gunmen had a history of espousing white nationalist rhetoric.

“Given the enormous threat of hate violence to our communities and our nation, we request that you meet with us along with our partners in the civil rights and faith communities to discuss the FBI’s role in protecting houses of worship, our communities, and all Americans,” the letter reads in closing.

You can read the full letter here.