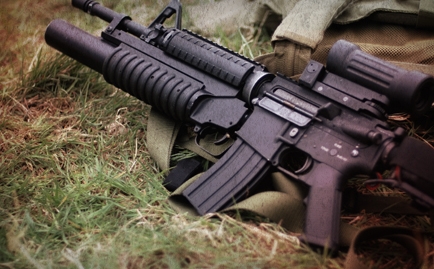 How Should We Tithe?

Last month, Bishop Elias Taban, head of the Sudan Evangelical Alliance, wrote an urgent plea to Christians in the West:

"It is time for guns to be buried and churches, schools, and medic clinics to be built on the graves of guns. … We need your continued prayers for the peace of Sudan and our region, so we ask you to pray that this treaty will also pass and provide protection for countries like ours as we face the many challenges ahead of us and our children."

The treaty Bishop Taban references is the Arms Trade Treaty (ATT), which would be the first international agreement to regulate the international sale of weapons. It would close current loopholes that are at the heart of countless stories of violence against women, families forced to become refugees, children made soldiers, and other horrors.

From the Sudan to Kosovo to Burma, from the Somali coast to the Mexican border, the situation is the same: Christians live in terror as well-armed warlords, rival clans and drug smugglers use the threat of violence to control innocent populations. Churches are forced to pull missionaries or limit services as armed conflict engulfs a region. And economic growth is stifled, leaving another generation without options to build a life of dignity and purpose.

In places like these, power is defined by who has the most guns and the most bullets—and the ATT would be a major step to breaking the backbone of this violent cycle. The treaty won’t affect domestic gun sales, and it certainly won’t end violence worldwide. But it will make it significantly harder for those with evil intent to acquire the weapons to carry it out.

Right now, however, the ATT is under attack. Shadowy special interest groups are trying to cripple the treaty by quietly working to kill two key provisions during the first major treaty negotiation, which takes place in New York at the end of February. The first provision requires nations to certify that weapons they sell will not be used in violation of international human rights or the laws of war. The second covers the sale of ammunition—critical because so many regions are already awash with small arms.

Without these provisions, the treaty will be toothless. And if these interest groups succeed, it will be the least of Christ’s global body who pay the greatest price.

But the U.S., which is both the largest arms exporter and the nation with some of the strictest regulations, can use its powerful market stake and moral leadership to ensure that the negotiations yield a robust and comprehensive treaty.

That’s why it’s vital that American Christians take up Bishop Taban’s call and, on behalf of our unheard brothers and sisters, urge our government to stand firm on a strong ATT.

As the treaty negotiations begin on Feb. 28, churches across the country will join together in a Day of Prayer and Fasting. This is a great opportunity to encourage your local church, Bible study and campus to stand with our brothers and sisters across the globe. There are three things you can do:

Get your community to join other Christians in a “refugee fast” on 2/28, eating the basic food and caloric count (~1000) of refugees displaced by violence. Learn more here or at the AVN action center.

Pray for the victims and perpetrators of violence alike: that victims would be protected, that the hearts of the violent would be softened and that the justice of Christ would break out around the world.

Pray for the earthly authorities whose intervention can help our brothers and sisters live “peaceful and quiet lives in all godliness and holiness” (1 Timothy 2:2, NIV). Pray in particular for the U.S. delegation to the treaty, led by Ambassador Donald Mahley—and when you’ve done so, write to them at KaplanJE@state.gov and let them know you are praying for them to hold the line on a strong ATT, and fight for the certification and ammunition provisions.

This is just the first step: additional negotiations will proceed until the ATT is finalized in the summer of 2012. Until that success, let the Church employ the “weapons of our warfare are not carnal, but mighty through God for the pulling down of strong holds” (2 Corinthians 10:4 KJV), to defend our brothers and sisters against the guns and bullets of the wicked.

Tyler Wigg-Stevenson is the founding director of the Two Futures Project.