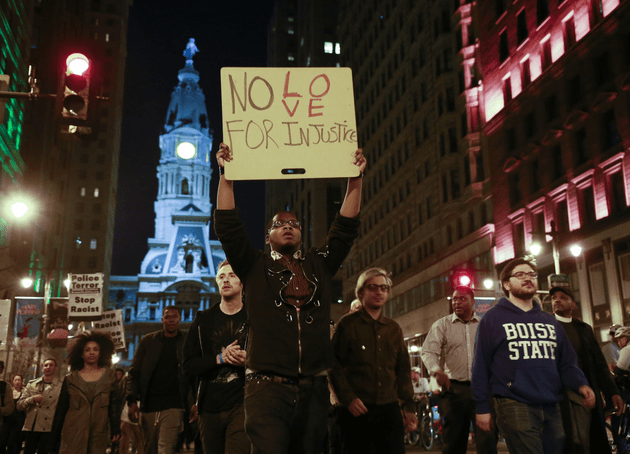 Why Does a ‘Relationship With God’ Feel So One-Sided?

In 170 cities across the country yesterday and last night, protestors took to the streets in mostly-peaceful demonstrations as part of a response to Officer Darren Wilson not being indicted for the shooting of unarmed teen Michael Brown. In cities including Atlanta, New York, Los Angeles, Dallas, Boston, Philadelphia and Chicago, protestors held up signs reading “Black Lives Matter,” shouting “Hands up! Don’t shoot!” as they walked together. In some areas, the demonstrators temporarily blocked roads and bridges, laid in the streets and marched through busy urban areas. For the most part, the nation-wide gatherings remained peaceful, despite a few incidents of isolated violence.

In Ferguson itself, demonstrators clashed with police for the second straight evening, as 2,200 National Guard were called in to prevent vandalism and looting. In total, 44 people were arrested in the Missouri town last night. St. Louis County Police Chief Jon Belmar told reporters that even in Ferguson, the violence was isolated to “few people who are bent on preventing this from happening in the most ideal way that it could,” adding, “We saw some protesters out there that were really out there for the right reason.” A driver in New York City, who got stuck in traffic on the Manhattan Bridge during protests across the city told The New York Times:

“I’m a black man … I have two black children, and enough is enough.” Asked if he did not mind sitting in traffic, he said, “I didn’t say that, but I understand injustice is never convenient.”

Why Ferguson Must Lead to Change

Darren Wilson Tells ABC News ‘I Did My Job Right’