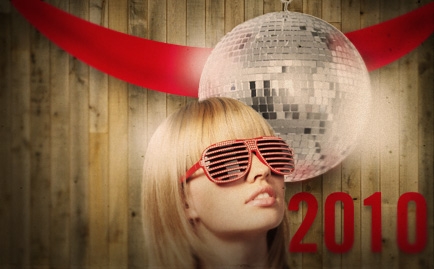 It’s
almost New Year’s. You’re hosting a party (or going to one with a shaky
host) and you want to do more than just say, “OK everyone, put down
your egg nog and watch Ryan Seacrest in Times Square as we watch a
glowing sphere fall down a pole.” Honestly, does anyone really get that
excited about that?

So
this year, it’s time to step it up. Entertain your friends in ways
beyond serving bad appetizers and cheap drinks (though both of those
have their place) and pressing “play” on an iTunes playlist marked
“party.” Monumental celebrations don’t just happen.

Fortunately,
that’s where we come in. Here are some cheap party games that are
certain to amuse even the dullest of guests. Few preparations are
needed, and the more players the better.

How
is this game played? Exactly. Gather all players into a circle. Make
sure everyone is positioned so they can turn to face the players to
their immediate left and right.

How it’s played:
Choose a starting player. The first player (Player 1) turns to his
right and asks the person next to him (Player 2) a question—any
question. Player 2 does not answer the question she was just asked.
Instead, she turns to the player to her
right (Player 3) and asks a different question. The questioners must
look directly into the eyes of the person they’re asking. The object of
the game is to not get “out." A player is out if they do any of the following:

1)
Answer the question asked of them even if it’s in the form of another
question. 2) Laugh, giggle, snort or fail in any way to maintain
complete seriousness. 3) Fail to immediately continue the rapid-fire
chain of questions. 4) Make a statement instead of a question. 5)
Repeat a question asked previously in the game.

Other rules: When you’re "out,"
you are removed from the circle. The last two remaining players ask
questions back and forth of each other. There is no minimum or maximum
length for questions.

Sample play: Player 1 to Player 2: "What is the average rainfall of the Amazon basin?" Player 2 to Player 3: "What time were you born?" Player 3 to Player 4: "Does this look infected?" Player 4: "Bwa-hahahahahal" (Player 4 is out.)

Once
you get the hang of it, add this fun variation to the mix: Instead of
kicking a player out when she breaks the rules, make her answer the
question truthfully.

Use a camera with an automatic self-timer. Gather your friends into a circle.

How it’s played:
Set the automatic timer on the camera, then start passing it around the
circle. Each person must take the camera, point it toward themselves
at arm’s length (however briefly), then pass it on to the person on
their right. Keep playing, pointing, and passing until the timer goes
off and the camera flashes. Whoever is holding the camera when it goes
off is "out." Laugh heartily, play until a single winner remains, then post all the pictures on Facebook. Laugh some more.

A
fun variation is to play in a dark or slightly dimmed room, where the
camera flash will further disorient the frantic participants. If you
want your camera to survive for more than one game, lay down some
ground rules—hand-to-hand passing only, no throwing, no dropping.

For a group of party guests who are unfamiliar with each other, "Stating the Obvious" is a great icebreaker game. Gather everyone into a circle.

How it’s played: Choose an opening player. That player must stand in the middle of the circle. and submit to three rounds of "observations." In order, every one in the circle gets to make a statement about the person in the center.

Round 2: Each person makes an observation starting with "I assume that … " The completed sentence must be linked to an observable fact. For example, "Since you’re sporting a fu-manchu, I assume you lost a bet." Again, the participant is not allowed to respond.

Round 3: Each person begins "I imagine you … " Based on previous observations, the outside players can form outrageous speculations about the participant, such as, "Because of your facial hair, I imagine you are a huge fan of Waffle House." The participant, at this point, can answer true or false.

Take
turns being the one on the hot seat. You’ll enjoy hearing how you’re
perceived. And from the standpoint of the players in the circle, it’s
fun to see just how intuitive we can be about people we don’t know By
the end of the game, everyone will have learned something interesting
about one another.

Apples
to Apples can be the worst game ever if you don’t play with the right
people or if you don’t know the stuff on the cards. So why not forgo
the awkward possibility and make your own version—especially for 2010.
This one requires some prep: When everyone comes in the door, have
everyone write down five celebrity figures from the past 10 years.
These can range from Barack Obama to Tila Tequila.

Then
have them write down three cultural terms from the past decade—it can
be a phrase, an adjective, or a made up word we use all the time now.
Something like “Googled” or “Yes We Can” or “The Twitterverse.”

How it’s played:
Distribute a set number (depending on how many guests you have) of the
celebrity papers to everyone playing. The questioner picks up one of
the cultural term cards and everyone chooses the celebrity they think
best fits the term. The winner of the round is selected by the person
who read the term card. The overall winner is the person who won the
most rounds of the game.

Just
make sure to keep it creative—like the real Apples to Apples, nothing
kills a game faster than boring celebrities or monotonous terms.

Now
you’re all set to host your very own hit New Year’s Eve party. With the
aid of these games, some good music and, fine, a little Ryan Seacrest,
you’re ready to wave goodbye to the past decade and greet 2010 with
open arms.

Portions
of this article originally appeared in the RELEVANT book Cheap Ways To … .

What You’re Doing for New Year’s