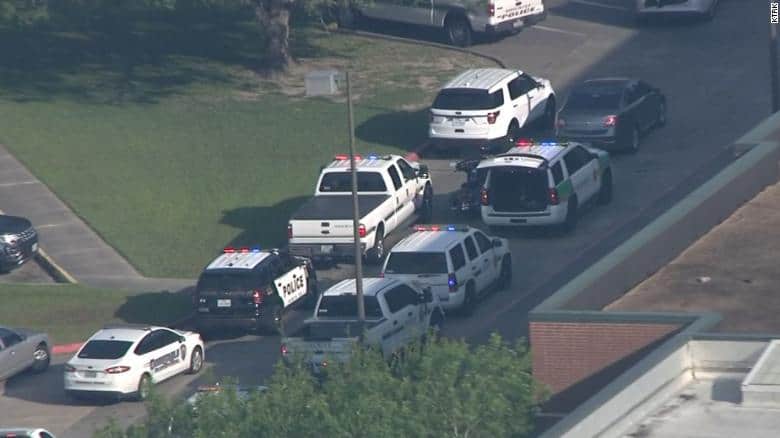 Helicopters touched down in the parking lot of Santa Fe High School near Houston, Texas, on Friday morning to evacuate the victims of another school shooting. The school district confirmed in a statement that the situation “is active, but has been contained.” The shooter has been arrested. Local news indicates “at least” eight students are dead, with multiple others wounded. (h/t Guardian)

UPDATE: Multiple law enforcement officials tell @KHOU that at least 8 students have died during a mass shooting at a Texas high school this morning https://t.co/FQxrBzB4In

Local media reported the shooter was a student. Someone says they saw a girl limping after being shot in the leg.

One student, 10th grader Dakota Shrader, shared her account of the morning: “We were in class, it was first period. The alarm started going off, everybody went outside, all the teachers were like ‘get this way, get this way, come over here.’ Next thing you know we hear the booms and everybody starts running as fast as they can. The next thing you know all the art [class] windows are getting shot, shattered.”

Many of the students ran from the scene, and there was a formal evacuation conducted by staff. Some images from the scene show students lined up to have their backpacks searched.

Santa Fe High School has about 1,400 students. The city of Santa Fe in Texas numbers only 13,000. The entire school district is on lockdown. This is a developing story, so look for more details to emerge throughout the day.