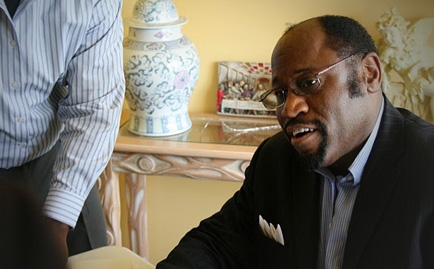 In the aftermath of the what the Red Cross, United Nations and other agencies now consider the greatest western hemisphere tragedy in our in history—the massive 7.0 earthquake that struck the capital city of Haiti, Port of Prince—the reaction by leaders and the common man were predictable.

The immediate response to this human tragedy by governments, world relief agencies, and other charity and religious organizations is the only bright spot in this dark episode of human drama. An event like this natural disaster could happen anywhere, anytime to anyone, and reduces us all too simply being human. Tragedies like this graphically remind of the fragility of our existence on this unstable planet we call Earth.

In light of this vulnerable nature of our humanity, the greatest need immediately in Haiti is identification with being human—deep sympathy, empathy, compassion and our personal and corporate prayers. Obviously, this has resulted in an outpouring of material emergency relief from the world community. In fact, the United States government has launched the largest relief efforts in American history.

The last thing Haiti and the wonderful Haitian people, who are our neighbors, need right now is any type of negative or depressive commentary or criticism. The physical, emotional, psychological, social and spiritual trauma gripping the heart and soul of this small island nation of 8 million is incalculable and demand a huge dose of compassion and support—not spiritual denunciation and the attempt to assess blame and cause beyond the act of nature.

I sat in my office here in Nassau, Bahamas, busily working on the formation of an emergency relief project for our church and the International Third World leaders Association to respond to this Haiti Tragedy while watching the unfolding news reports on the television networks. It was then I was stunned by words  uttered by an influential leader in the Christian community—my friend and colleague Dr. Pat Robertson, founder and president of CBN and Regent University.

I dropped my pen, my jaw fell open, and my spirit sank in deep, disappointed shock as Dr. Robertson attempted to analyze and explain the devastating earthquake event hours after its impact. Robertson’s conclusion was that this horrific natural tragedy is a result of the people of Haiti making a “deal with the Devil,” and as a result was under a divine spiritual curse.

First, I am not sure what he was thinking, or his intent, or how to react to this, other than with deep disappointment and surprise over the insensitive, untimely and ungodly implications of this character-damaging statement by my brother. It is rare that I would find it necessary to respond publicly to the actions of a member of the Church community, but due to the fact that the statements were made in a global media context, and could convey a misrepresentation of the perspective and conviction of many other constituencies of the global church community, it is necessary to clarify our position.

I wish to therefore emphatically state I am deeply saddened, disappointed and do not agree with the statements made by Dr. Pat Robertson, and I hope he would urgently extend an apology to the nation of Haiti, the Haitian people, the Haitian Church community and the Church worldwide.

First, it is important to remember that as humans we are all created in the image of God and the biblical tenant is that the Creator loves mankind so much He gave Himself for their salvation. Thus, the value of human life is measured by what He paid to redeem it. It is His expressed desire that none perish but “all” come to full salvation.

Secondly, it is difficult for anyone to judge accurately the cause and source of such massive natural human disaster such as this earthquake in Haiti or the September 9/11 tragedies. Perhaps the question should or could be asked—“Was America under a curse when the terrorist extremist bombed the Twin Towers in New York?” I would not imagine me making such statement to the people of the United States. It is important that we always error on the side of compassion, love and caring for the human image of God no matter what.

Thirdly, I and my church family network personally relate to scores of spiritually sound, spirit-filled, dedicated, faithful, church leaders and churches who were and are still working diligently for the Kingdom of God in Haiti. There are churches there that have thousands of members and facilities who relate directly with us of whom we have been proud. I wonder how do these loyal Christian leaders receive, interpret or even attempt to comprehend the words uttered by Dr. Robertson. I am embarrassed to even speak with my Haitian pastors regarding these statements, as it reflects badly on such a respected Christen leader in America.

Fourth, we have within our borders and our church fellowship thousands of Haitian believers who are stunned by these heartless, untimely words spoken by Dr. Robertson, and it has fallen to me to clarify our position on this matter and reassure them that these words do not represent in any way the views of the majority of the Christian community. Our Haitian churches are looking to me for comfort, not condemnation.

It is my hope that my friend and brother Dr. Robertson will withdraw his statements and make a public apology to the suffering Haitian people, especially the Haitian Christian community who need our support at this devastating time.

Let us all remember that the attitude of the Lord regarding all humanity, including who we call “the wicked.” Perhaps this may temper our reactionary, ignorant, immature and un-Godlike response situations we do not understand nor can explain. Here are words spoken by the creator regarding all mankind: