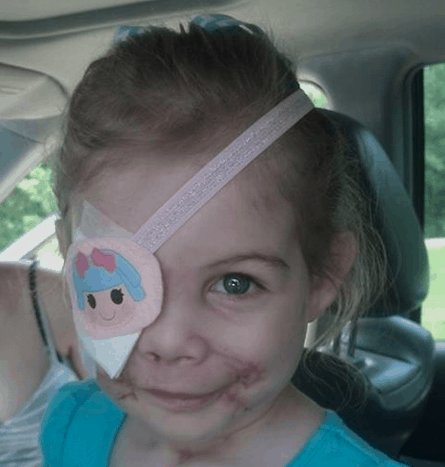 Last weekend, you may have caught wind of the infuriating case of 3-year-old Victoria Wilcher, who was attacked by her grandfather’s pit bulls, resulting in the loss of her right eye, a half-paralyzed face, a broken jaw and numerous facial scars. Victoria has been in and out of the hospital ever since but, following her last visit, her grandmother took her to a Kentucky Fried Chicken for some mashed potatoes. But once they were there, an employee allegedly asked them to leave because Victoria’s face was scaring (“disrupting”) other diners. “She won’t even look in the mirror anymore,” her grandmother told reporters. “When we go to a store, she doesn’t even want to get out” of the car.

Victoria’s grandmother posted the story to Facebook, where it quickly spread and now, KFC is investigating the matter and, in the meantime, made the following statement to the Associated Press.

“As soon as we were notified of this report on Friday, we immediately began an investigation, as this kind of hurtful and disrespectful action would not be tolerated by KFC. Regardless of the outcome of our investigation, we have apologized to Victoria’s family and are committed to assisting them. The company is making a $30,000 donation to assist with her medical bills. The entire KFC family is behind Victoria.”

A local KFC franchisee is also offering to take Victoria and her family out to a KFC-sponsored picnic, saying “…regardless of the outcome of the investigation, she has been thru more than any little girl should and I wanted to give her a special treat” …