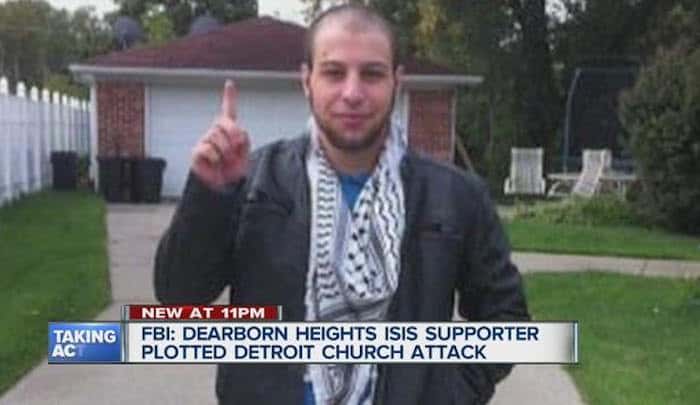 A 21-year-old man in Dearborn Heights, Michigan, allegedly planned to attack a Detroit-area megachurch in the name of ISIS. Federal authorities arrested the guy, Khalil Abu-Rayyan, back in the fall, not on terrorism charges, but on unlicensed gun and marijuana possession. According to Breitbart, the FBI has been investigating Abu-Rayyan since May of last year because of communication—phone and social media—expressing support of ISIS. The Detroit Free Press even reported that some of Abu-Rayyan’s posts include “videos of a Jordanian pilot burned alive, Christians being beheaded, and men being thrown from buildings in executions.” And in some online chats with undercover agents, he also relayed that he was planning to shoot up a 6,000-member church. He told the agent, “It’s easy and a lot of people go there. Plus people are not allowed to carry guns in church. Plus, it would make the news. Everyone would’ve heard.” Apparently, Abu-Rayyan’s plan was thrown off when his dad found the guns and ammo he was going to use. He told the undercover FBI agent, “Honestly, I regret not doing it,” Abu-Rayyan added. “If I can’t do jihad in the Middle East, I would do my jihad over here.”

Are You Trusting in a False Hope?

Does the Faith of a Presidential Candidate Matter?