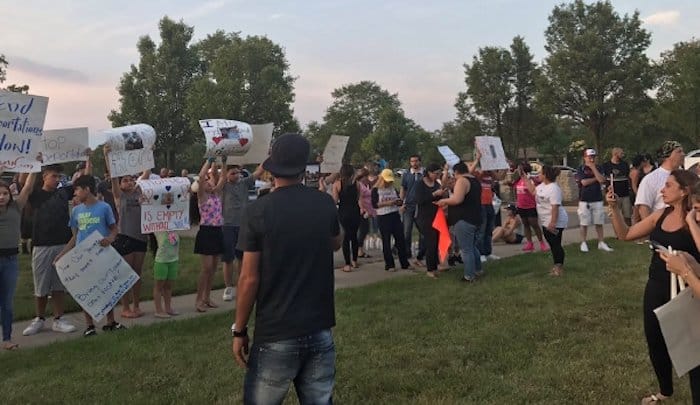 According to reports, ICE officials have rounded up “dozens” of Iraqi Christian immigrants living in Michigan, sparking protests from friends and family members who say sending them back to Iraq amounts to a “death sentence.” The people are part of a Christian sect known as the Chaldeans, who belong to a rite of the Roman Catholic Church.

The report from the Detroit News says anywhere between 40 and 100 immigrants were arrested on Sunday, with more arrests expected to follow this week. ICE’s Detroit field office said that many of the immigrants who were arrested were wanted for “homicide, rape, aggravated assault” and other violent crimes, but advocates contest this, saying many of the Chaldeans had already served sentences for small crimes or minor immigration infractions.

“This is a challenging time,” president of the Chaldean Community Foundation Martin Manna told the Detroit News. “There hasn’t been deportations to Iraq for quite some time. This is a land of laws. But sending [them] back to Iraq is the equivalent of a death sentence.”

The Detroit News spoke with Netta Hana, who moved from Iraq to the U.S. with her family in 1992. Her little brother, who was arrested by ICE, served eight years for a drug offense in his 20s and is now facing deportation to a country where he doesn’t speak the language and fear he’ll be killed by Islamic State militants because of his Christian tattoos.

“He made a mistake,” Hana, 38, said of her brother. “He doesn’t deserve to die for it. He is a prime target for the radicals to target him. Just because he committed a crime doesn’t mean he has to be treated like an animal. He’s a human being.”

ICE raids are becoming increasingly common, but the detention of Iraqi Christians is new and appears to be part of a deal the U.S. struck with Iraq over President Donald Trump’s proposed travel ban. The second draft of the travel ban omitted Iraq from its list of banned countries, a negotiation Iraq agreed to when the U.S. promised to send back Iraqi nationals living in the U.S.

The Spiritual Practice Americans Are Missing

Sufjan Stevens: Katy Perry and I Were Probably at the Same Bible Study