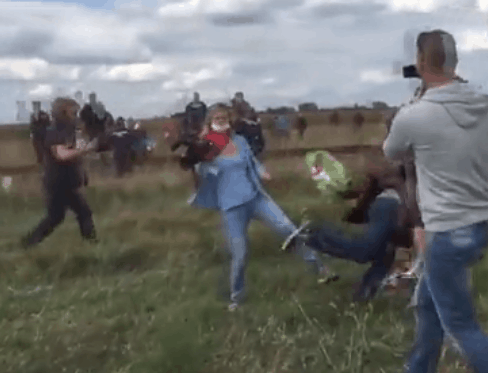 What the Massive Appeal of Taylor Swift Says About the Church

A camera operator for a Hungarian nationalist TV station has been fired after she was filmed violently kicking and tripping migrants fleeing a holding camp. At one point, she intentionally trips a man running with a young boy in his arms. The scene unfolded as dozens of families, children and individuals broke through a police line, attempting to escape a camp set up by Hungarian officials to house the migrants as they flee violence in their home countries. Many are attempting to get to Germany and Austria. There are reports of harsh conditions in the camps where Hungary has held many of the people attempting to get to nearby countries. In a statement, N1TV said, “The camera operator behavior was completely unacceptable.”

Judge: Kim Davis Can Go Free If She Does Not Prevent Marriage Licenses from Being Issued

Is the Justice Movement Just a Trend?