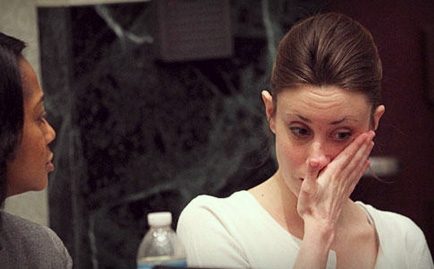 I don’t normally like to think of myself as the sort of woman who’d be disappointed to find that a jury of 12 found a mother not guilty of murdering her child. But as it turns out, I am exactly that sort of woman. Because when I did my usual avoiding-working flip over from Facebook to the Chicago Tribune site and saw the headline proclaiming Casey Anthony as “not guilty,” I gasped. I might have even sworn, such was my alarm. I was appalled.

While I wasn’t personally hot on the trail of this case, I had been paying attention as this horrible story played out. I remember hearing the first bits about the case, about the lies, the crazy stories told. “Of course the mom did it,” I thought.

I followed the news about the trial. “Guilty!” I’d think with each pronouncement of the prosecutors. As Casey Anthony’s lawyers mounted their defense, hinting at or spelling out seemingly ridiculous defenses, I’d roll my eyes and rush over to Facebook and Twitter to chart the reaction. I was not the only one outraged by the defense. Only a guilty person would need such a whacked-out defense, right?

And then came the verdict: Not Guilty. A jury couldn’t say without reasonable doubt that Casey Anthony killed her little girl.

And I was disappointed. And angry. … And suddenly feeling very, very guilty.

What was wrong with me? A mother was just cleared of killing her child. That should be good news, right? As “clear” as the evidence was to us arm-chair jurors, clearly it was not as crystal to the actual jurors (some of whom were "sick to their stomachs" over reaching a verdict).

So why couldn’t I feel good, rejoice even that 12 people found that Casey Anthony didn’t kill her daughter, as prosecutors claimed?

As we sat stuck in traffic on the way to a White Sox game, I asked my husband this very thing. Rafi simply shrugged and said, “We always want people to be guilty.”

When was the last time you watched a high-profile case with fingers crossed, secretly chanting: “Not guilty! Not guilty!”?

I’ve never. Not even with Martha Stewart. And I really like her.

But it wasn’t until I confessed my recent disappointment in the shaky evidence against former IMF chief Dominique Strauss-Kahn that I realized how perverse this thinking was—how wrong it was to like my people guilty, as I do.

My first explanation for this was that I feel this way because I “so believe” in the U.S. justice system. I so believe our police are doing their jobs and doing them well. I so believe our prosecutors are only bringing forward cases with plenty of convicting evidence. I so believe that by the time a person is arrested, booked, charged and sitting in that courtroom next to her attorney, she has been properly vetted, evidence properly collected and justice properly applied, that all it takes is a little explanation. And presto! Justice served. God bless America.

But maybe the reality is that we like people guilty because it makes us feel better about ourselves. My own husband was disappointed in Casey Anthony’s verdict because a mother killing her own child was such a heinous, appalling crime—one of the few sins he knows he would never commit (and not just because he’s not a mother). And because of this, her guilt made him feel like much less of a messed-up sinner himself. Much less desperate for grace than someone like her.

That was his dark truth. And it may be for others. It’s valid.

However, I didn’t feel better as a mother or a human because Casey Anthony was “worse” than I am. In fact, my Calvinist sense of my own sin, my own dark, evil places, won’t let me get away with that.

Instead, I think it’s something much more basic: We like our people guilty because judging feels good. Or, to put it nicer, justice feels good.

But herein lies the crux for us Christians: one of these is a sin, the other something we’re to seek. So how do we manage? How do we seek justice (in all elements of the word) without judging? How do we watch the river of justice roll (Amos 5:24) without becoming plank-eyed sawdust spies (Matthew 7:3)?

It isn’t easy. But strangely, for all the injustice that still lurks, for all the innocents wrongly convicted and all the criminals set free, four little words that bedrock the U.S. justice system really help. We do this by believing one another “innocent until proven guilty.”

As Christians, we recognize a sort of opposite position in the spiritual realm—we are guilty until “redeemed by the blood of the Lamb,” if you will. But “innocent until proven guilty” goes straight to the heart of the grace we live under. It’s a brilliant, gracious, loving approach to not only a nation’s judicial system, but also a brilliant, gracious, loving way to live, to view one another.

As we Christians seek justice for those who are trampled on and oppressed, we have no trouble seeing their goodness and “innocence.” We need to carry that over to those against whom justice is sought—on behalf of another.

But again, it isn’t easy. Especially when it means a little girl was murdered, her body dumped and seemingly no one is paying the price. Especially when a conviction would’ve seemed so tidy. We wouldn’t have had to worry about predators still roaming or troubled mothers back out partying.

While the American system of innocent until proven guilty sometimes disappoints us, the Christian view doesn’t have to. God promises justice—for Caylee Anthony, for all those wronged. Yet, He always offers grace.

The tension of justice and grace is where we’re called to live—and what we’re expected to extend to others.

Caryn Rivadeneira is the author of Grumble Hallelujah: Learning to Love Life Even When It Lets You Down (Tyndale) and a founding member of Redbud Writers Guild. Caryn lives with her family just outside of Chicago.