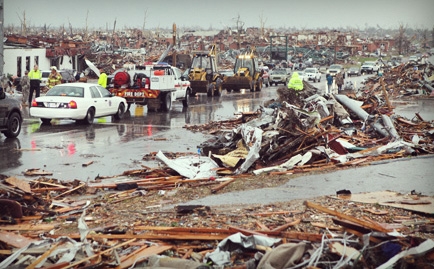 Last Sunday Connila Gillette, 74, was surfing the Internet in her ground-floor apartment in Joplin, Mo., when her upstairs neighbor banged on her door. When Gillette opened the door her neighbor told her a tornado was bearing down on their complex. The two of them—and his 10-year-old son—rushed into an interior bathroom and hid in the bathtub.

“Within seconds everything was gone,” she says. “All that was left was the bathtub and about a foot of tile. But none of us had a scratch.”

Other neighbors were not as fortunate. Several died or are unaccounted for. Today, Gillette is living in the sanctuary of IgniteChurch.tv, which opened its doors as a shelter to the community in the hours after the storm.

“This is our city, this is what we’re here for,” says Shane Munn, a pastor at the church, noting that the church has not set any timelines as to when it will stop acting as a shelter. “We’ll provide for as long as we can.”

“We want to thank all the corporations that are donating truckloads of supplies and everyone making financial contributions,” says Hal Donaldson, president of Convoy of Hope. “That is what is keeping our semi-trucks rolling and ensuring that the people of Joplin receive the help they need to get through this traumatic episode.”

Volunteers are helping make that happen too.

Jenny, a 23-year-old from Arizona who was raised in Joplin, drove through the night to her hometown after hearing about the EF5 tornado on Sunday.

“I took a few weeks off work to help out anyway I can,” says Jenny.

The sentiment was shared by those helped too. Deep in a neighborhood pounded by the tornado Gina, a homeowner, was overwhelmed with emotion as Convoy of Hope team members wheeled a cooler full of supplies and energy drinks up her driveway.

“This is great,” she says, taking a deep breath to stem tears. “I appreciate it.”

Gina describes how she and her colleagues rode out the storm in a windowless room at St. John’s Regional Health Center, which sustained heavy damage.

“I could hear the tornado coming and could even taste the debris that was in the air,” she says. “After it passed we opened the door to the room and everything looked different.”

Halls and waiting rooms were darkened, she recalls.  Floors were strewn with debris and injured people were crying out for help. After helping out at the hospital Gina began walking home after discovering her car had been pancaked by another car during the storm.

A few miles down the road from Gina’s home is Faith Assembly of God Church, which sits on the very edge of the tornado’s swath. Though the church was nearly destroyed, dozens of volunteers from the church unload pallets of supplies or counsel and pray with survivors or grill burgers and hot dogs for survivors and those who have descended on Joplin to help.

“If this church was 50 yards farther down the road there would’ve been 50 more people killed,” says a building contractor.

The 50 people the contractor speaks of were mostly members of the youth group who had gathered at the church to prep for a pie auction and youth service last Sunday night. As the tornado hit, the teens and their leaders gathered in an interior hallway.

“It was scary, but there were so many people praying I felt instantly that everything was going to be alright,” says Will Craig, who was helping set up.

On this day, throughout the swath that the tornado cut—which is estimated to be nearly one mile wide in some spots and several miles long—chainsaw crews cut limbs and remove debris. Nearby, search and rescue workers sift through the rubble looking for survivors while children help their parents salvage mementos from what is left of their homes.

The view from within the swath is surreal. Steel buildings are twisted like straws, cars and trucks resemble soda cans twisted into oblivion, power-poles and fence posts are blown over as if made of rubber. Trees have either toppled over or are stripped bare of leaves and bark. Boards stick precariously out of the sides of walls and the dank smell of wet wood hangs in the air.

Donaldson meets a young homeless family in a shelter. He tells the family that everything is going to be all right. The twenty-something father says, “It can’t get much worse.”

For those who lost loved ones, homes, possessions and jobs the young father’s words are spot on. But as Gillette said earlier, “I’ve never had anything bad happen to me that hasn’t turned to good.”

In Joplin, the groundswell of support, generosity, volunteerism and community is palpable … and also a sign that good can come from a terrible situation.

Here’s how you can help: Make a donation at Convoy of Hope, WorldVision, the Red Cross or other justice organizations serving in Joplin. You can also text “Convoy” to 50555 (message and data rates may apply).

Kirk Noonan is the senior communications director for Convoy of Hope.