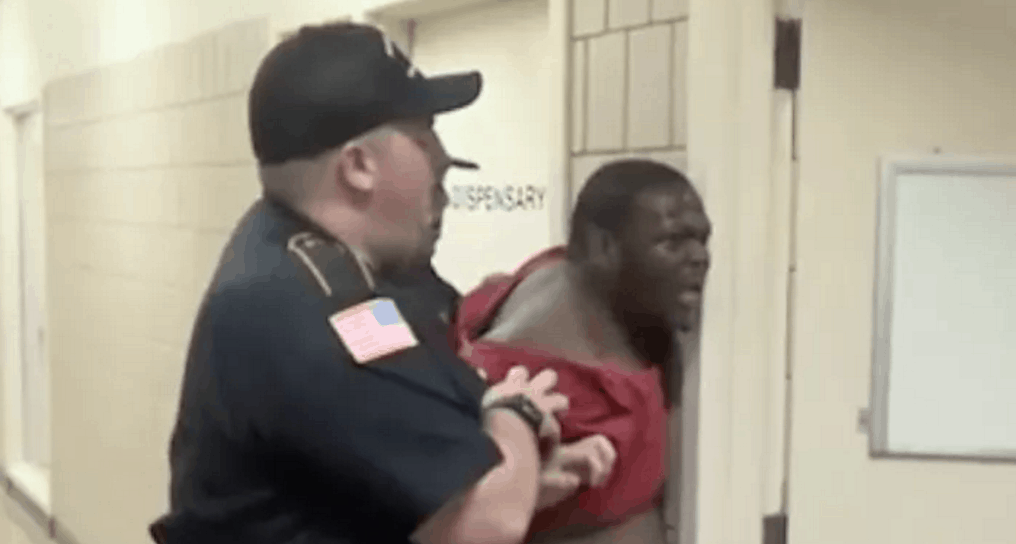 When 35-year-old Michael Sabbie died while in the custody of a private jail, officials claimed it was “natural causes.” Now a video of Michael Sabbie’s final hours has been released, and it is truly horrifying (Warning: It is violent and contains some brief nudity).

Sabbie was arrested after his wife said he threatened her during an argument. He denied making any threats. He was arrested, and a few hours later, before the court appearance, a nurse at the jail treated him for a low level of oxygen after he complained of breathing problems.

On the way back from the court appearance where he pleaded not guilty to a domestic violence charge and told the judge he needed medical assistance, he had difficulty breathing while walking back to his cell.

After stopping to catch his breath, a guard tackled him to the ground. Moments later several guards joined in, pepper spraying him, claiming he was “resisting.” The entire time, Sabbie can be heard saying, “I’m sorry” and repeatedly saying, “I can’t breathe.”

He is then dragged into a nurse’s station, where he doesn’t appear to receive any help, and says over and over again, “I can’t breathe.” At one point, he begs for water. The nurse didn’t fill out any paper work after the “evaluation” because she was in a hurry to get off of work.

The guards continue to threaten him with pepper spray, and placed him in a shower before dragging him into a cell. 12 hours later, he was dead. He was supposed to be checked on every 30 minutes, but the guard in charge of doing the checks later said “not all the checks were done and they were only documented” telling investigators they “didn’t consistently enter and check the cells inside the pods during every one of the 30 minute checks.”

Though the incident happened last year, the video was just released. Sabbie’s wife has been told that no one will be prosecuted.

Father I know you will bring me thru all obsticles at your own pace….. Faith

Here’s a New, Slightly Less Lame Trailer for the ‘Legends of the Hidden Temple’ Movie