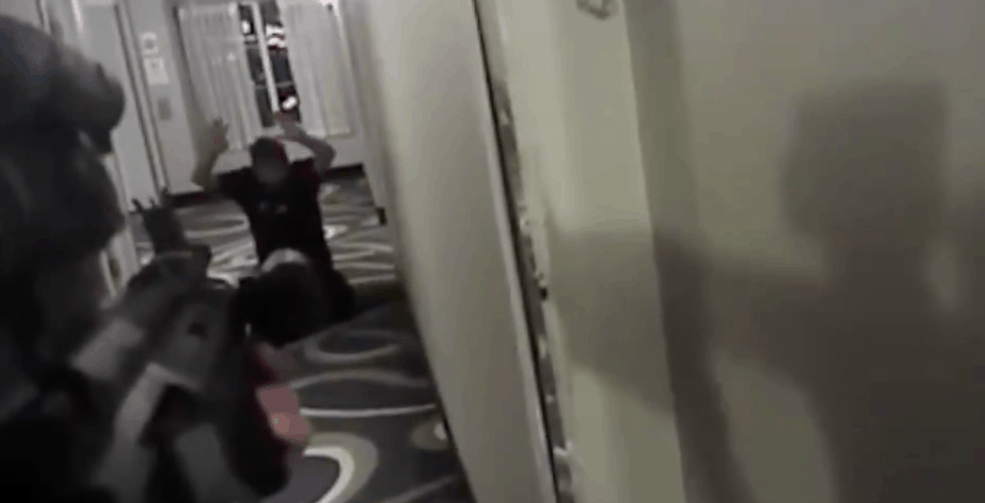 Shocking police body cam footage shows unarmed, 26-year-old Daniel Shaver crawling on his hands and knees, begging police not to shoot him, moments before a former officer named Philip Brailsford fired his AR-15 into the man’s body five times, killing him. A jury just found Brailsford not guilty of murder.

The incident took place in Mesa, Arizona in January 2016, but a judge just allowed the footage to be made public. You can watch it here but be warned, it is extremely graphic and disturbing. The confrontation begins around the 12:50 mark.

In the video, Shaver and an unnamed woman can be seen lying on the floor outside of a hotel room where police were responding to a call about someone pointing a gun out of a hotel room window. Officers later found Shaver’s pellet gun, which he used as part of his job as a pest control worker, in his hotel room.

Brailsford can be heard shouting orders along with Sgt. Charles Langley, who is not seen in the video. The two officers grow increasingly frustrated at the duo’s apparent confusion about their demands. At one point, Shaver is weeping, holding his hands above his head, begging for the police not to fire. He appears to be obeying commands to crawl on the ground when Brailsford fires.

It was an event Shaver’s family lawyer Mark Geragos described as “an execution, pure and simple. The justice system miserably failed Daniel and his family.”

Brailsford testified that he believed Shaver was reaching for a weapon when he fired. “If this situation happened exactly as it did that time, I would have done the same thing,” he said during the trial.

6 Inappropriate Christmas Cards You Shouldn’t Send to Anyone

Here’s How You Can Help Wildfire Victims In Southern California