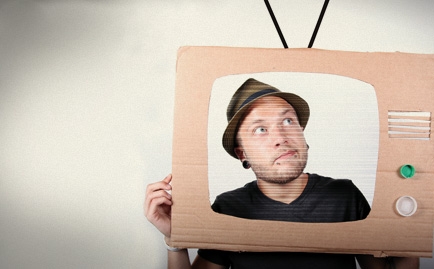 Halloween is fast approaching, and it’s the one time of the year you can dress as a fictional character without bringing upon you the scorn and derision of everyone you know. Whether it’s Halloween or some manner of Christian alternative, odds are there are some costume parties in your future. So, here are some ideas for costumes that are high on creativity and low on cost.

Go As an Adam Sandler Character

Adam Sandler was a well-spring of zero-effort costume ideas during his tenure on SNL. Who can forget Crazy Pickle Chin or Crazy Sneaker Hand? It’s a funny cultural reference, costs nothing and you can spend the nights saying things like, “I got a sneaker for a hand! If that doesn’t warrant some candy, I don’t know what does!”

Walk around stretching a spring and claim to be the tension between North Korea and the international community. Dress in all yellow, paint "CO2" on your face and tape empty ice cube trays to yourself to represent Global Warming. Carry a bucket and say you’re the government bailout. Adorn a white T-shirt with a pithy, 140-character sentence written in LOLSpeak and tell people you’re Twitter. Wear a t-shirt and write "This is what Halloween in a Recession looks like" on the shirt. The possibilities are limitless, and—in the right social setting—it just might get you beaten up for being a dork.

Boxes Are a Treasure Trove

Cut head and arm holes in a box, plaster the front with a print-out of static and, bang, you’re analog television. A multi-colored pattern of squares and you instantly become a Rubik’s Cube. Or, you can just be a box. There’s no shame in that.

Go as a Time of Day

Wear all black clothes and tape cotton ball "stars" all over you to be nighttime. Go with all blue clothes, groups of cotton balls, and a paper sun mask to be daytime. Or wear an orange top, red pants and pink facepaint to be sunrise/sunset.

In the mood to do a little something daring this year? Go as Janus,
the two-faced Roman god. That’s right … shave your head and then draw
a face on the back.

Want to play it completely safe and boring? Go as a random guy named
"Chad"—buy a "hello my name is" sticker and when people ask who you
are, say "I’m Chad" as if they’re idiotic for not knowing. Or just dress in your normal Saturday clothes and tell people the truth: you are a lazy Halloween party attendee.

Make Use of Garbage

Tape refuse to a sweater and you can be just about anything. A gutter, a landfill, the floor of a movie theater. Just be prepared for people to avoid you due to the smell.

Go as a zombie: rip holes in your jeans; wear an old ratty t-shirt; put flour on your face, charcoal around your eyes; mix corn syrup and food coloring to make blood and apply it around your mouth and on your hands. Another classic Halloween favorite? Candy corn. That’s right. Go as candy corn: wear yellow pants, an orange shirt, and a pointy white hat.

Dress up as something from nature. For example: grass. To be grass, just wear brown pants and a green shirt, then die your hair green and make it very spiky. How about going as a bunch of grapes? Just wear all brown clothes and tape purple balloons to yourself. Or you can always go as a rock. Classic.

Just Go As Yourself

Go in your normal attire, and explain to people that you’ve dressed as yourself. Then inform them that one day you’ll be famous, and lots of people will dress as you for Halloween. You’re just ahead of the curve.