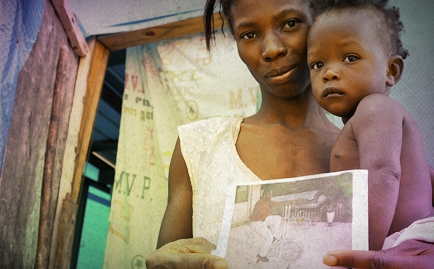 “I don’t know what we will do if people forget about Haiti.”

The statement hung heavy in the air, like the foreshadowing of an imminent storm rumbling in the distance. Likely intended as a thoughtful statement, my Haitian friend’s sentence struck a chord within me that has been reverberating ever since.

What does it mean to remember? To relinquish the notion of forgetting. This week marks the one-year anniversary of the earthquake that shaped the already fragile nation of Haiti. For those of us living and working in Haiti, it is impossible to forget. The still tender wounds of loss and despair are carried around as an appendage for all to see by some. For others, the pain is tucked away in the folds of their heart, privately tended to in the quiet moments of the night.

In a place where disorder and strife has marked the landscape for decades, the Jan. 12 earthquake virtually shattered an already fragile nation. What remained were shards of brokenness and sorrow, anguish and surrender, all of which implored the same question: How do we begin picking up the pieces?

Initial relief came in the form of clean water, shelters and food rations. Survival was triggered. But the concept of survival took on a new meaning as cholera, political strife and unrest found their way into the stories of many Haitians during the past 12 months.

Haiti, in its own right, is in a league of its own. At times, efforts of progress seemed to move in a perpetual dance, two steps forward, one step back. Some sought refuge in God. Others in the prospect of positive leadership. New jobs were generated by non-governmental organizations (NGOs) and cash-for-work programs, and the nation’s education system began an overhaul. In the delicate space that exists between streaks of darkness and disarray, hope produced color.

Undoubtedly, Haiti is a challenging place to create a context for hope. But God is at work here and is relentless in His pursuit of Haiti. Haitians are innovative, and their ingenuity has been fashioned over time. I spoke to several survivors this week, on busy thoroughfares, in urban towns and while visiting temporary shelter communities. Life is moving forward for many, and slowly inching ahead for some. These are a handful of their accounts.

I met Yolande in a temporary shelter community. She was walking around in her bare feet, stained and hardened from the dusty paths surrounding the camp. Her young daughter, Estelle, clung to her leg and hid behind it, her big eyes looking up from the safety of her mother’s nearness. Yolande’s presence was filled with a deepness that spoke volumes of her journey since January. Balanced on her hip was her young son Chrisma. She came over to me clutching two photos in her hand, wrinkled and traveled, that spoke of happier times. A husband with his wife and child, and a house, intact and standing.

“I watched my husband die in the street,” she began. “A wall came down on him, and there was nothing I could do. I think 70 people died around me that day.” She looked down as she continued. “He had a job at the port, he took care of us. I am alone now. I am afraid to go back to that house.” She took Estelle’s hand. “I think about him. I miss him. I think about my life a lot, how it was. Now, I am always trying to survive.”

Yolande had left her home in Port-au-Prince and moved north, staying with friends along the way. She is waiting for a shelter of her own, and will receive one soon. “No matter what happens, I will take care of my children. This is what my husband would’ve have wanted. And I’ll always do that, for him.”

Ferdinant moves with a limp, dragging his right foot slightly as he walks. He sits for most of the day, on a brightly colored plastic chair, amidst the rubble and remnants of his damaged store.

“I am a chair salesman. And I sell other little things,” he says as he points around him. He lifts up his pant leg and reveals a black brace surrounding his ankle. “My foot was damaged in the earthquake. But I’m still working, trying to rebuild my store.

“Before the earthquake, people would buy maybe 10 things. Now, they’ll buy five. But at least they are still buying.”

He leads me to see his house, a tent set up next to the crumbled home he used to live in. “I’ll fix this one day, too. Life was hard then. It is hard now,” he says matter-of-factly. “We hope for things to change.”

Ferdinant looks back. “Since organizations like yours have come near my town, people are getting help. That is what we need, more of this help.”

Astriele summoned to me on Route 1, as I walked near his home. It’s clear he is proud of his makeshift shop. He’s a carpenter. Headboards, picture frames and skillfully crafted chairs line the perimeter of his dilapidated house.

He uses his saw to begin crafting a new piece, specks of sawdust and splinters fly through the air as he hits a piece of wood with deliberate motions. “My house fell down—you can see the damage here. For a long time, I was afraid to sleep inside.”

“Now, I have no choice,” he says. “I leave the door open so that if it starts to shake, I can get out.” He reaches next to him to get another piece of wood. “Business is slower now, but people come from all over to buy my work.”

I ask him what he wants for his future. He smiles. “One day, I think, I will have my own shop. That would be nice.”

For survivors like Yolande, Ferdinant and Astriele, the road ahead is uncertain. But they are not defeated, and they are not alone. Their wounds are slowly healing and resilience is surfacing in its place. Help is here in the form or international organizations. Hope, unwavering, is making a way.

We stand with them and remember today. We will not forget you, Haiti.

Roseann Dennery is a relief worker with the faith-based relief and development group Samaritan’s Purse. She resides in Haiti and desires to unveil the resilience of the Haitian spirit through her writings and photos.