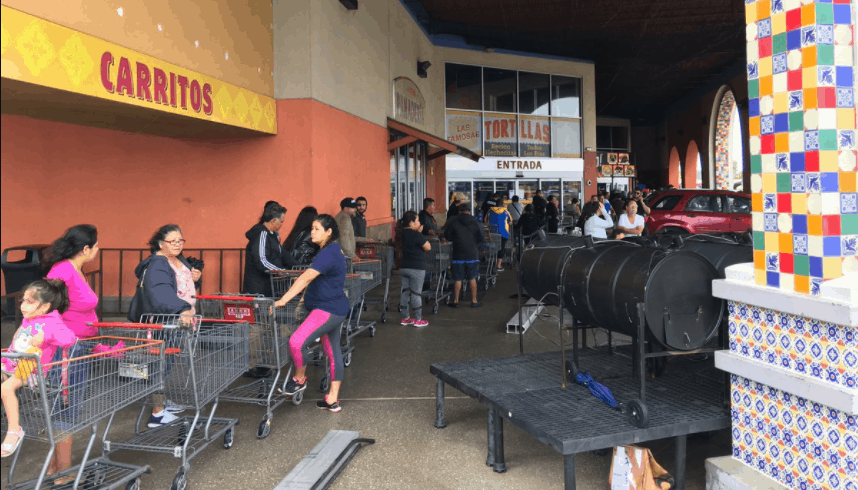 While the world has been thrilled and inspired by stories of heroism and rescue in the wake of Hurricane Harvey over the past few days, Texans who have been impacted by the flood are forced to consider the longer game. To whit, as the streets are underwater and transportation in and out of affected areas is difficult or impossible, how are people going to eat?

Groceries are running low in Houston and people are starting to worry https://t.co/rlbLdVsbTD pic.twitter.com/OpzFc43Kyl

That’s a question that’s becoming a very real issue in Houston and the surrounding areas. Even the most dire predictions of Harvey’s destruction ended up falling short of the true level of devastation, and many families found that their careful rationing and planning ended up falling likewise short.

A grocery store has reopened in Houston. This is the line to get in. pic.twitter.com/wUBtW40bCJ

Stories are now being circulated of lines to grocery stories stretching around the block, and families waiting for hours to get in only to find the aisles largely bare. There is little word on when and how staff will be able to restock staples like bread, milk and produce.

Huge lines to get into this Houston grocery store. One guy told me he had to wait 30 minutes #harvey pic.twitter.com/WqJQUn2IWy

Other grocery stores are simply locking their doors or turning people away. “I don’t want to turn people away,” Regina McDaniels, a floor manager at a Texas grocery store told Buzzfeed News. “But we’re closing soon and I don’t want people to wait then not get in.”

C.S. Lewis’ ‘The Problem of Pain’ Is More Relevant Than Ever