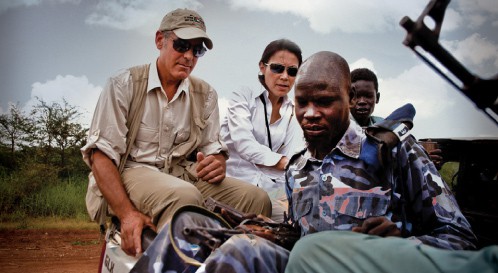 When George Clooney isn’t appearing on the big screen, he’s speaking out on social issues—and now he’s set his sights on Sudan. The region was engaged in a decades-long war until 2005, when a peace agreement granted Southern Sudan autonomy for six years. Well, it’s now six years later, and a controversial vote earlier this year could plunge the country into renewed turmoil: In January, Southern Sudan voted on a referendum to establish its independence. Even before the votes were tallied, rebel soldiers from Darfur had begun launching attacks on Sudan’s army.

Clooney’s newest endeavor, Satellite Sentinel, is a website created to help the world keep an eye on Sudan and to ensure such violence stays at a minimum. Citing that many in the developed world were unaware of other humanitarian crises until afterward, the actor’s goal is to make sure that doesn’t happen with Sudan. The Satellite Sentinel Project collects press releases, reports and updates a blog with news about Sudan, as well as encourages people to take action. The site is a collaboration between Not on Our Watch, Google, the Enough Project, the United Nations UNITAR Operational Satellite Applications Programme (UNOSAT), the Harvard Humanitarian Initiative and Trellon, LLC.

Returning to the States after a trip to Sudan earlier this year, Clooney managed to bring attention to another issue in the country when he contracted malaria during his visit. The actor recovered quickly from the life-threatening disease.