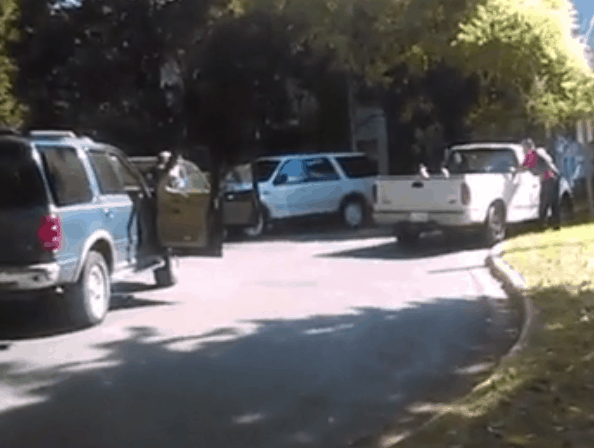 The family of Keith Scott has released disturbing cell phone footage of his deadly encounter with police.

The footage, which you can see here (warning, it is graphic), shows police officers pointing guns at a pick up truck, repeatedly yelling for Scott to “drop the gun!” His wife, who is holding the camera, is heard yelling, “He has no weapon … He doesn’t have a gun, he has a TBI [traumatic brain injury], he’s not going to do anything to you guys. He just took his medicine.” She repeatedly tells officer, “Don’t shoot him.”

At point, a voice in the background yells, “I’m about to get f***ing shot over here!”

The video is frantic, and it’s not clear what is happening inside the vehicle or around it when Scott exits.

Mrs. Scott yells “Keith, don’t you do it!” several times before several gunshots are heard.

The moments after are jarring, with Mrs. Scott saying, “He better not be dead. … He better live!”

The Charlotte Police department also has footage of the encounter, but has refused to release it, citing an investigation into the shooting. They have said that Scott was shot because he posed an “imminent, deadly threat” to the officers on the scene, and have said he had a gun.