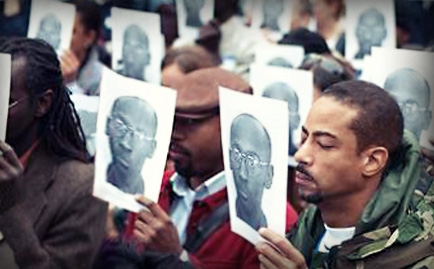 On Wednesday, Sept. 21, 2011 at 11:08 p.m. ET, Troy Davis was executed by lethal injection in the State of Georgia—all this despite evidence that he may have been innocent. Certainly, there was too much doubt.

He was executed in the name of justice … but what does this say about the system and state of our understanding of justice in this country? Like others, I mourn the situation. And I mourn the execution of Troy Davis. And I mourn for the MacPhail and Davis families.

Honestly, I don’t know enough about all the details and intricacies behind Davis’ story and circumstances that led him to jail and ultimately, to his execution. Certainly, the entire situation is tragic—starting with the death of an innocent police officer/security guard named Mark MacPhail.

In a recent letter he sent to his supporters, Davis wrote these words:

I want to thank all of you for your efforts and dedication to Human Rights and Human Kindness, in the past year I have experienced such emotion, joy, sadness and never ending faith. It is because of all of you that I am alive today, as I look at my sister Martina I am marveled by the love she has for me and of course I worry about her and her health, but as she tells me she is the eldest and she will not back down from this fight to save my life and prove to the world that I am innocent of this terrible crime.

As I look at my mail from across the globe, from places I have never ever dreamed I would know about and people speaking languages and expressing cultures and religions I could only hope to one day see first hand. I am humbled by the emotion that fills my heart with overwhelming, overflowing Joy. I can’t even explain the insurgence of emotion I feel when I try to express the strength I draw from you all, it compounds my faith and it shows me yet again that this is not a case about the death penalty, this is not a case about Troy Davis, this is a case about Justice and the Human Spirit to see Justice prevail

I cannot answer all of your letters but I do read them all, I cannot see you all but I can imagine your faces, I cannot hear you speak but your letters take me to the far reaches of the world, I cannot touch you physically but I feel your warmth everyday I exist.

So Thank you and remember I am in a place where execution can only destroy your physical form but because of my faith in God, my family and all of you I have been spiritually free for some time and no matter what happens in the days, weeks to come, this Movement to end the death penalty, to seek true justice, to expose a system that fails to protect the innocent must be accelerated. There are so many more Troy Davis’. This fight to end the death penalty is not won or lost through me but through our strength to move forward and save every innocent person in captivity around the globe. We need to dismantle this Unjust system city by city, state by state and country by country.

I can’t wait to Stand with you, no matter if that is in physical or spiritual form, I will one day be announcing,

As I’ve spoken with different folks over the past few days, I’m not in the most capable position to make a legal case for his innocence or guilt.

I am not suggesting that making a case is not important. Pursuing truth and justice are indeed very important—not only to this case but to any healthy and functional society. But while fully acknowledging the importance of laws, rules and consequences, isn’t it (past) time to put to death the death penalty?

Capital punishment, the death penalty, or execution is the sentence of death upon a person by judicial process as a punishment for an offense. Crimes that can result in a death penalty are known as capital crimes or capital offenses.

The term "capital" originates from the Latin capitalis, literally “regarding the head.” Hence a capital crime was originally one punished by severing the head from the body.

Did you know that only 58 nations actively practice capital punishment with 96 countries having abolished it? According to Wikipedia: “the remainder having not used it for 10 years or allowing it only in exceptional circumstances such as wartime.” If you haven’t figured it out, the United States is one of the nations that practices the capital punishment.

Those that are religious that support the death penalty often quote verses from Scripture “supporting” capital punishment.

Please. You don’t have to quote Scripture to me. I have read those verses. I have studied those verses. But to elevate isolated verses and isolated stories to contend that God allows and even commands capital punishment is dangerous. To not be open to the remote possibility that the Scriptures is written within a social construct and with subjectivity and always interpreted through some sort of human lens is dangerous. Perhaps George Bernard Shaw’s commentary is apropos to this conversation: “God created us in His image, and we decided to return the favor.”

I believe in the authority of the Scriptures. I believe in the Word of God. But I also believe that the Bible was written in context and culture and subsequently, we must—with deep prayer and discernment—study, interpret and be guided by the Holy Spirit.

Let’s be honest: If the Bible were easy to interpret, we wouldn’t need to study, teach, preach, write, exegete, etc.

We have a Savior, and His name is Jesus. And His life, words and ministry all testify to a God and a Way and a Kingdom that is beyond what the religious elite and experts understood to be the ways of God. But if Christians believe in Jesus, follow Jesus and worship Jesus, I wonder this question: Who would Jesus execute?

We know Christ was brutally executed—but who would Jesus execute?

Some will criticize the oversimplification of the above question and my thought process, but perhaps we are overcomplexifying the fundamental truth that “life is sacred.” And by life, I mean, that all life is sacred. Even the life of a Troy Davis. (And yes, even the life of a Lawrence Brewer who was also executed yesterday for his brutal hate crime. If we truly believe in the sanctity of life, how can we jubilantly celebrate the assassination of Osama bin Laden?)

It is my hope that “Christians” who believe in the sanctity of life would lead the way to finally put to the death the death penalty.

"Continue to fight this fight"

Troy Davis’ final words just before his execution were as follows:

I’d like to address the MacPhail family. Let you know, despite the situation you are in, I’m not the one who personally killed your son, your father, your brother. I am innocent. The incident that happened that night is not my fault. I did not have a gun. All I can ask … is that you look deeper into this case so that you really can finally see the truth. I ask my family and friends to continue to fight this fight. For those about to take my life, God have mercy on your souls. And may God bless your souls.

Please. Let’s not reduce the life of Troy Davis to a 48-hour frenzy of social media. Let’s all recommit ourselves to human dignity and justice.

Eugene Cho, a second-generation Korean-American, is the founder and lead pastor of Quest Church in Seattle and the executive director of Q Cafe, an innovative nonprofit neighborhood café and music venue. You can follow him at his blog, Twitter or his Facebook page. Eugene and his wife are also the founders of One Day’s Wages, a movement of people, stories and actions to alleviate extreme global poverty.
0 Comments
RELEVANT September 23, 2011
Share
Tweet
Share
Trending Now

Why You Can’t Stay Away from Whole Foods’ Cheese