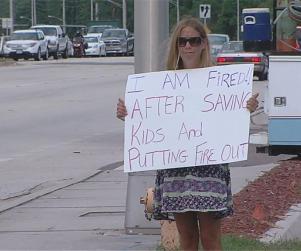 Here’s the situation. Imagine you’re a daycare teacher, looking after your class at the Little Temples Childcare in Jacksonville (the one in Florida, of course) when you discover that the oven outside your classroom has caught fire. You attempt to put the fire out, but then the fire alarm goes off. Collecting your wits, you rush back to your classroom, rouse your class from their naps, lead them outside to safety, run back inside to make sure all your children are safe and then put out the fire before the fire trucks show up.

So, children saved. Building saved. Fire out. You’re a hero, right? Well, that shows how much you know, because this is the tale of Michelle Hammack, who went back to work the following day and was promptly fired for leaving her children alone in a classroom (to go put out a fire, remember). “It’s not acceptable, and if anybody else does the same thing, I will fire again,” Little Temples owner Olga Rozhaov told CBS. “I will fire them. No question.”

So, Michelle Hammack was fired for saving her building from a fire. It’s just another reminder to always think twice before saving someone’s life …

Update: Super sleuth commenter @KylesInternets did some intrepid investigating and found that Hammack actually left the classroom to make the lunch that ended up causing the fire in the first place. This, admittedly, makes the whole situation a little less a cut-and-dry case of bureaucracy run amok.

Express Your Disdain for Snail Mail with Grumpy Cat Stamps