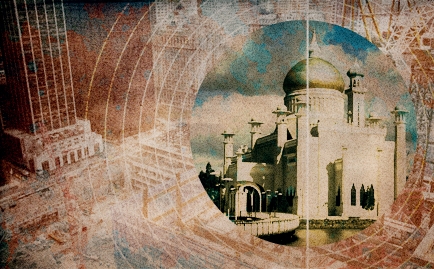 Debate
over the proposed “Ground Zero Mosque” construction a few blocks from
the fallen World Trade Center (WTC) towers has saturated news headlines
for the last few weeks. The Muslim center is slated for construction in
a former Burlington Coat Factory store, and it seems most Americans are
far more comfortable with the idea of purchasing fleece at a reduced
cost than providing Muslim Americans a place of community and outreach.

When
a CNN/Opinion Research poll released Wednesday asked whether one
favored or opposed a “mosque” being built two blocks away from the WTC
site, nearly 70 percent of Americans responded with disapproval. Very little
new information has entered the debate besides the generic rhetoric of
protestors and supporters. But would the public opinion be changed if
the facts surrounding the “Ground Zero Mosque” were presented more
clearly, or even at all?

In
reality, all the facts have not been presented fully or accurately to
most Americans—highlighting the ever-growing problems with
contemporary journalism via pundits. If disseminated more broadly,
these facts would presumably reshape the debate toward a more fruitful
discussion of the role of freedom of religion and Christians truly
embracing Christ’s commandment to love thy neighbor.

Is it really a mosque?

The
mainstay of the debate centers around what is being built on the site.
Families of 9/11 victims regard the site as a sensitive place where
massive pieces of the airplane wreckage fell. Since then, the owners
could not even sell the badly damaged property, until now.

Formally
named the Cordoba House, the “Ground Zero Mosque” is now referred to as
Park51 after its physical address at 45-51 Park Place. The name,
Cordoba House, references Cordoba, Spain, where during the 10th and 11th centuries the Muslim Caliphate served as an epicenter of interfaith dialogue and peaceful coexistence. The
Cordoba House was designed after a Jewish community center in Manhattan
and modeled much like a YMCA, featuring amenities typical of exclusive
resorts, including an arts institute, a culinary school and food court,
fitness facilities and swimming pool, daycare center, bookstore and
conference rooms. Thus,
this “mosque” has become the premier face of Muslim-American outreach
to other Americans, provoking a serious backlash at their
“insensitivity” for its close proximity to the WTC. These various components hardly resemble the mosques of the Middle East, and should put some Americans at ease.

A
look at the worship center’s essential components, however, shows no
minarets or muezzin calls to prayer. While the center does contain a
large worship space to accommodate up to 2,000 Muslim worshipers, it
does not seem appropriate to label this singular feature as its overall
grand scheme. Many hospitals around the country contain chapels, though
we do not label the entire hospital as a church. A church I grew up in
met for a number of years in a school auditorium, yet no one protested
the school as a religious worship center. Likewise, it seems unfair for
Americans to selectively categorize the Cordoba House in such a way.

Who will run the Cordoba House?

A
lesser-discussed but nonetheless important fact is who stands behind
the controversial project. Imam Feisal Abdul Rauf, author of What’s
Right with Islam is What’s Right with America, leads the Cordoba
Initiative and will be responsible for the center’s operations and
spiritual leadership. The group sponsoring the building of the
controversial “Ground Zero Mosque” is not an extremist but rather an
intelligent “moderate Muslim.” Imam Rauf is a leading scholar in a
branch of Islam known as Sufism, which is particularly controversial
among Muslims.

This
sect of the religion of 1.2 billion people is often described as the
mystical side, focusing on the inner orientation to peaceful worship of
Allah. Many Muslim leaders—both Sunni and Shi’a—deny that Sufism is
orthodox or even a part of Islam. Its defenders cite that its adherents
range across all Islamic sects, races and nationalities, and can be
traced back to the cousin of the religion’s main prophet. Imam Rauf’s
Sufism will play a major key element in the teachings and general
personality the community center will exhibit, and should be considered
when discussing whether or not Americans should allow such an endeavor.

In
many of the recent objections to the Cordoba house, dissenters have
argued they do not feel a mosque should be allowed to exist in such
close proximity to the “hallowed ground” of the former World Trade
Center towers. Some on the future extremes of the political spectrum
are even labeling this as a Muslim invasion of lower Manhattan.
However, do the facts really suggest this?

Many
high-profile politicians and pundits have argued that two blocks is
simply too close to the WTC, and have suggested between five blocks and
as far away as Harlem might be more appropriate—an entire debate within
itself! Yet these figures fail to acknowledge the long history of
practicing Muslims and mosques in the area. For more than 30 years, a
mosque (recently led by Imam Rauf) has been in operation only 12
blocks from Ground Zero. Masjid al-Farah, or “Masjid Manhattan,” is a
small mosque that has quietly and peacefully operated without raising
any suspicions or objections.

Historically,
foreign immigrants overwhelmed lower Manhattan, especially during the
Industrial Revolution and the years leading up to World War II. Many of
the Arab immigrants in New York City settled around the area where the
World Trade Center would eventually be erected. As the Arab population
rose, the neighborhoods gave way to the name “Little Syria.”

While
the completion of the Brooklyn Battery tunnel heralded the eventual
diminishing of the name Little Syria, many Arab families still remain
prominent in the area. Rather than an “invasion” of lower Manhattan by
elusive Islamic jihadists, the Cordoba House provides a place of
community and a house of worship for the many Muslim-Americans already
residing in the area.

How, then, should we respond?

So
what do the myths surrounding the debate of the “Ground Zero Mosque”
mean for Americans? To believe these myths is to rely solely on the
emotional wounds still left from the violent assault on our nation and
freedoms instead of approach the situation as an opportunity to
demonstrate our resolve to protect our distinctly American values, even
when unpopular.

More
specifically, what does this debate mean for Christians who are called
to serve as salt and light to the world? Though we must not diminish
the reality of the threats of radical extremism to this nation, as
Christians, we must
retain our integrity and faith in God’s providence. The true test of
our faith rarely comes in times of peace or tranquility, but rather in
moments of adversity. Just as the early church wrestled for their
freedom of religion against Roman persecutions, so we face the same
struggle today. Faithful Christians must always find ways to express
the love Christ called us to, even (and maybe especially) toward our
Muslim-American neighbors.

Give Up Your Birthday, Save Lives