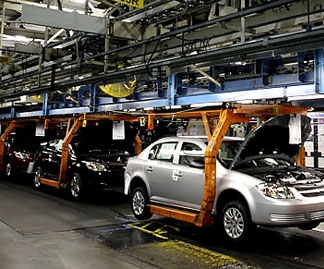 Well, the economic downward spiral continues. GM just announced that it is filing for Chapter 11 bankruptcy. Like a rock, indeed. However, this isn’t just another in a long line of failed businesses. General Motors constitutes the largest industrial bankruptcy in American history. In other words, it’s a really big deal.

It’s especially a big deal given last month’s collapse of Chrysler. On May 31, a U.S. judge approved the sale of the majority of Chrysler’s assets to Italian automaker Fiat, leaving Ford as the last member of the original Big Three automakers.

President Obama was optimistic about the future of the company, saying that GM would emerge from its Chapter 11 proceedings stronger and more stable. “I’m confident that the steps I’m announcing today will mark the end of an old GM and the beginning of a new GM, a new GM that can produce the high-quality, safe, and fuel-efficient cars of tomorrow, that can lead America towards an energy-independent future, and that is once more a symbol of America’s success,” Obama said.

Fritz Henderson, chief executive of GM, is also retaining a remarkably optimistic attitude. At the press conference announcing the company’s bankruptcy, Henderson painted the bankruptcy in hopeful terms. “This new GM will be built from the strongest parts of our business, including our best brands and our very finest products. We will have far less debt, fully competitive labor costs, and the ability to generate sustained and positive bottom-line performance,” Henderson said.

The bankruptcy is, of course, no great surprise. It’s been coming for months. General Motors stock has dropped from a high of $87 in 1999 to less than a dollar at the end of last month, culminating with GM actually being removed from the Dow Jones Industrial Index, the index of the 30 largest American companies. More than 2,500 GM auto dealerships have been shut down and thousands of people have been laid off.

But what does a move like this mean? In practical terms, the government will take a 60 percent stake in the company and give GM about $50 billion in financial aid to keep it afloat. One of the unfortunate side effects are the many ancillary businesses that are affected by GM’s shutdown. Factories that make components for GM automobiles will be drastically impacted by GM’s failure. Seven powertrain and stamping plants are set to close in 2010. The end result may be people being put out of work, and a major blow to the stock market. Coupled with this could be a further weakening of already shaky consumer confidence. Few people want to buy a car from a company they’re not sure will be around next year, even though the company has assured customers that warranty coverage and customer support won’t be affected.

Ultimately, it’s unlikely that General Motors will cease to exist. Even as it continues to post enormous losses, it’s simply too huge a player in the U.S. economy for the government to allow it to dissolve. However, the bankruptcy of GM will no doubt bring an enormous impact to many Americans.

Another wrinkle in this is the possible Christian response. Is it indeed the responsibility of the Church to see economic hardship on our own doorstep as a social justice issue? With the shaken confidence of consumers, the possibility of many people being put out of work and the effect GM’s bankruptcy could have on the economy, the Christian response should be one of uncommon faith in the midst of uncertainty coupled with empathy and practical help for those affected by these developments. With so many needs worldwide, it is often easy to overlook the ones staring us in the face. In the potential aftermath of GM’s announcement, the Church should be prepared to bring hope to those suffering from the aftereffects.

Regardless of the outcome, the Chapter 11 filing of General Motors marks a significant moment in our nation’s history. A stalwart industrial juggernaut has shown that it is not invincible. We may not be able to choose how we are affected by this, but we can choose how we react.

The Theology of Rock

Where Am I Wearing Wednesday: Under Armour