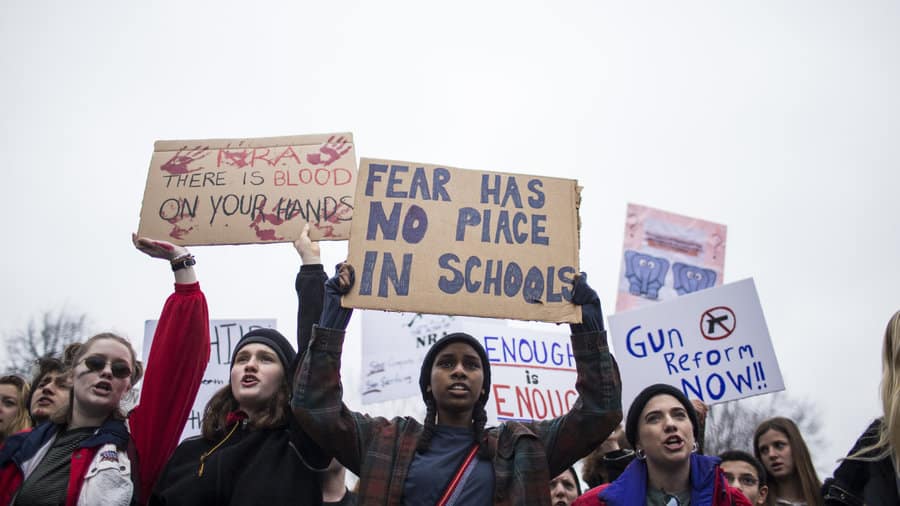 Last Saturday, the March for Our Lives, a protest led by Parkland’s Marjory Stoneman Douglas High School students geared toward ending gun violence, drew an estimated 800,000 participants in Washington, D.C. along with 800 other demonstrations being held in cities across the world in solidarity.

But the diversity and scope of Saturday’s protest was as surprising as it was inspiring. According to Pullen Memorial member Zoe Nichols, this march “had a diverse range of age and race and I saw a lot more religious groups than I normally see.”

Among the faith-motivated participants were many different religious organizations: Jewish, Catholic, and other denominations, all making the religious case for ending gun violence — often at the urging of their youth. Several different faith leaders said that the young people of their congregation inspired them to take action.

Multiple churches and faith-based organizations from all over the U.S. piled into vans with their youth to make the drive to Washington, D.C. on Saturday morning.

Among the swarm of faith communities was Central Presbyterian Church, making the drive from downtown Atlanta. Eleven high schoolers piled into a van with their pastor at the wheel, commissioned to participate in the protest during a worship set the weekend prior to the march.

Using her pastor’s phone and raising her voice over the anticipation from the 10 other students making the trek alongside her, Lydia Catterall, a junior and youth group leader at Central Presbyterian, shared that “the main theme you’ll see [at Central] is acceptance — sort of trying to create a world where we can all accept each other.”

Come Saturday morning, these multiple faith organizations, including Central Presbyterian, not only made an appearance in D.C., but showed up in full force, signs in hand, ready to march alongside one another to support an end to gun violence.

Three-thousand members of the Union for Reform Judaism were among these faith groups that gathered Saturday morning prior to the march to worship and pray before joining the demonstration.

Charles Goodman, a 15-year-old student and survivor of the Parkland shooting, cited his experience and his faith as reasons for joining the demonstration in Washington D.C.

“The Jewish people have a saying: thou shall not stand idly by while your neighbor’s blood is shed,” Goodman shared in an interview. “My neighbor’s blood, my school mate’s blood, my teacher’s, my administrators’, my athletic director’s — their blood has been shed. At this point, it is up to the survivors, and those who want to help the survivors. And it’s crucial we get the support from the Reform movement, because if we believe in our faith, then this is the right thing to do.”

On Friday night leading up to the march, the Washington National Cathedral hosted a vigil for the victims of gun violence. In addition to multiple prayers from many different faith leaders, this vigil included short reflections from those touched by these tragedies, including April and Philip Schentrup, parents of Stoneman Douglas student Carmen, who was killed in the shooting.

“Prayers do not feel like enough,” April said, reflecting on her grief. “We must act — we must act to change current laws that allow profound devastation and heartbreak.” Without new laws, she said, “we are condemning more of God’s children to desolate despair and gut-wrenching tragedy.”

You Need to Forget the ‘5-Year Plan’

It’s Your Patriotic Responsibility to Watch ‘The Americans’