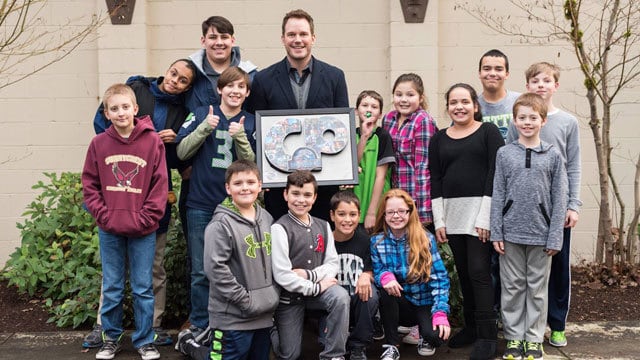 It looks like Jennifer Lawrence isn’t the only one spreading holiday cheer.

Chris Pratt celebrated the opening of the Boys & Girls Club of Snohomish County’s new teen center named in the honor of his late father, Dan Pratt. Chris posted a Facebook photo announcing the news, sharing his father was “a funny, thick skinned, hard working man who commanded respect for authority.” Pratt also gave a charitable donation of $500,000 check to the center in his hometown of Lake Stevens, Washington and shared that his father “was a pillar of his community” making the name of the center all the more fitting.

On Facebook, Pratt said that he hopes his fellow Americans aren’t “divided and bitter” after the election and a “24 hour news [that] cycle filled our eyes and ears with such incessant negativity and drama.” He encouraged them to make a difference in their communities, writing:

We are not our government. We are not what those folks on TV say we are. We are our Boys and Girls Clubs, our rotary clubs, our senior centers, our youth sports leagues, made up of volunteers, Americans; altruistic people investing time into our greatest asset, our children. We’re just as strong as our will to give back to the community. We always will be. So get strong. It feels good. Be the instrument God uses to bless your community.

Get after it. Set a goal and get to work.

Chris Pratt, a father himself to a four-year-old son, lost his father while he was filming for the movie Jurassic World to multiple sclerosis.

Our Favorite Stories of 2016: The Editors’ Picks

Like It or Not, There’s Going to Be a Third Season of ‘Fuller House’