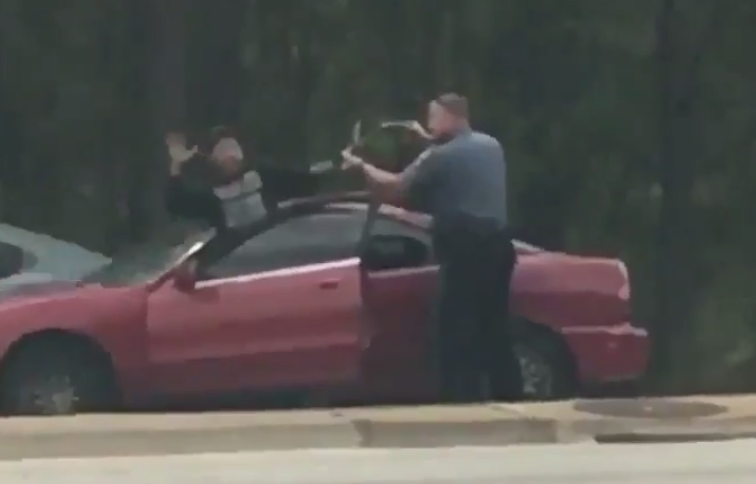 Once again, a horrific abuse of power is being brought to light that would have otherwise gone unnoticed if not for iPhones.

Demetrius Hollins was pulled over in what appeared to be a routine traffic stop by 19-year veteran of Georgia’s Gwinnett County police force, but video shows Sgt. Michael Bongiovanni punching Hollins, whose hands appear to be raised.

Warning, the videos are disturbing.

This how Gwinnett county police getting down now smh pic.twitter.com/FbLUmavbAx

A second officer, Robert McDonald, is later shown running onto the scene and kicking Hollins while he’s on the ground.

A Gwinnett police officer was seen unnecessarily kicking a man in the face today. Here's the footage @GwinnettPd.. pic.twitter.com/9b66eJoZCI

According to the report, Bongiovanni believed he smelled marijuana when he pulled Hollins over. Bongiovanni also said Hollins was acting strange and asking for his mother. “Hollins refused to place his hands behind his back, spun around and began to actively resist arrest by bending at the waist and trying to push me away,” Bongiovanni wrote in the incident report.

Police Chief Butch Ayers condemned the actions, telling reporters that “[he is]almost for a loss of words for what we had to go through today for the unwarranted actions of two of my officers.”

The officers have been fired, and a police investigation is ongoing.

A Buzzfeed Investigation Freed This Man From Prison