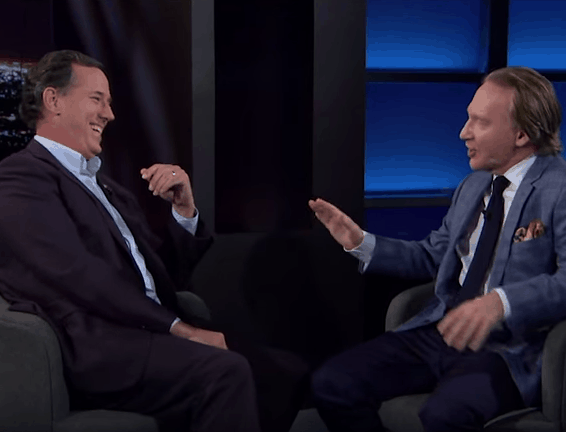 Things got interesting on an episode of Real Time with Bill Maher this week, when Maher—who is an outspoken atheist—told GOP hopeful Rick Santorum—an outspoken Roman Catholic—“I like the Pope better than you do. You’re saying the pope should stick to what he knows, and I find that ridiculous … So much of religion is arrogance masquerading as humility. He’s the Vicar of Christ—your God. Shouldn’t you have the humility to say, ‘If the Pope thinks climate change is a problem, maybe I should?’” You can watch the exchange here, though it contains strong language.

The two discussed Pope Francis’s recently encyclical, in which he said there was a Christian imperative to help poor communities affected by man-made climate change. Santorum previously said that Pope Francis needs to “leave science to the scientist” (as others have pointed out, the Pope has a chemistry degree) and previously told Chris Wallace, “I’m saying, ‘What should the Pope use his moral authority for?’ I think there are more pressing problems confronting the earth than climate change.” In this week’s interview with Maher, Santorum said he loves Pope Francis and believes that his teachings on climate change are a way to bridge bridges with people who may disagree with the Catholic Church on other issues. He even pointed to the fact that Al Gore has publicly said that he is now considering becoming a Catholic because of the Pope’s teachings. Throughout the interview though, the two disagreed on what affect human activity has on the environment.

6 Bible Characters Who Should Get Their Own TV Dramas