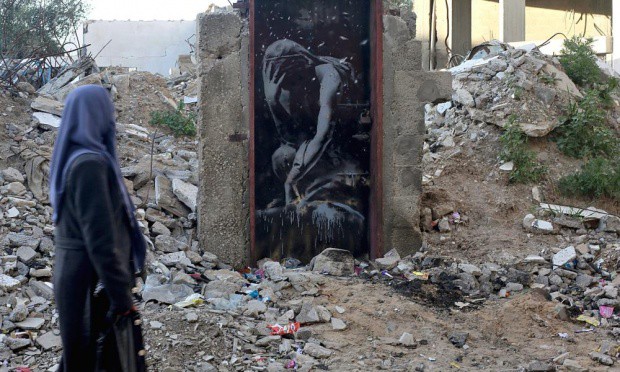 Gaza police have seized a door bearing a painting by Banksy, one of the world’s most famous street artists whose art typically sells for hundreds of thousands of dollars. The image is Greek goddess Niobe, weeping for her dead children and was painted on a door standing among the ruins of Rabie Darduna’s home in February. During the 50-day war with Israel an estimated 18,000 homes were destroyed and 110,000 people were displaced. Banksy visited Gaza shortly after the conflict and painted a series of political messages on walls and homes. Darduna sold the door for $175, the price of a regular iron door without realizing its worth. “One man told me: ‘We’re from the group that did it’,” Darduna told BBC. “They made me sign a paper. It said I agreed on 700 shekels ($175; £120). They pressured me and I accepted because I need the money.” Darduna filed a complaint with a Gaza court and the door will be held in police custody until rightful ownership can be determined.

Here’s a Look at the ‘Ant-Man’ Super-villain Yellowjacket