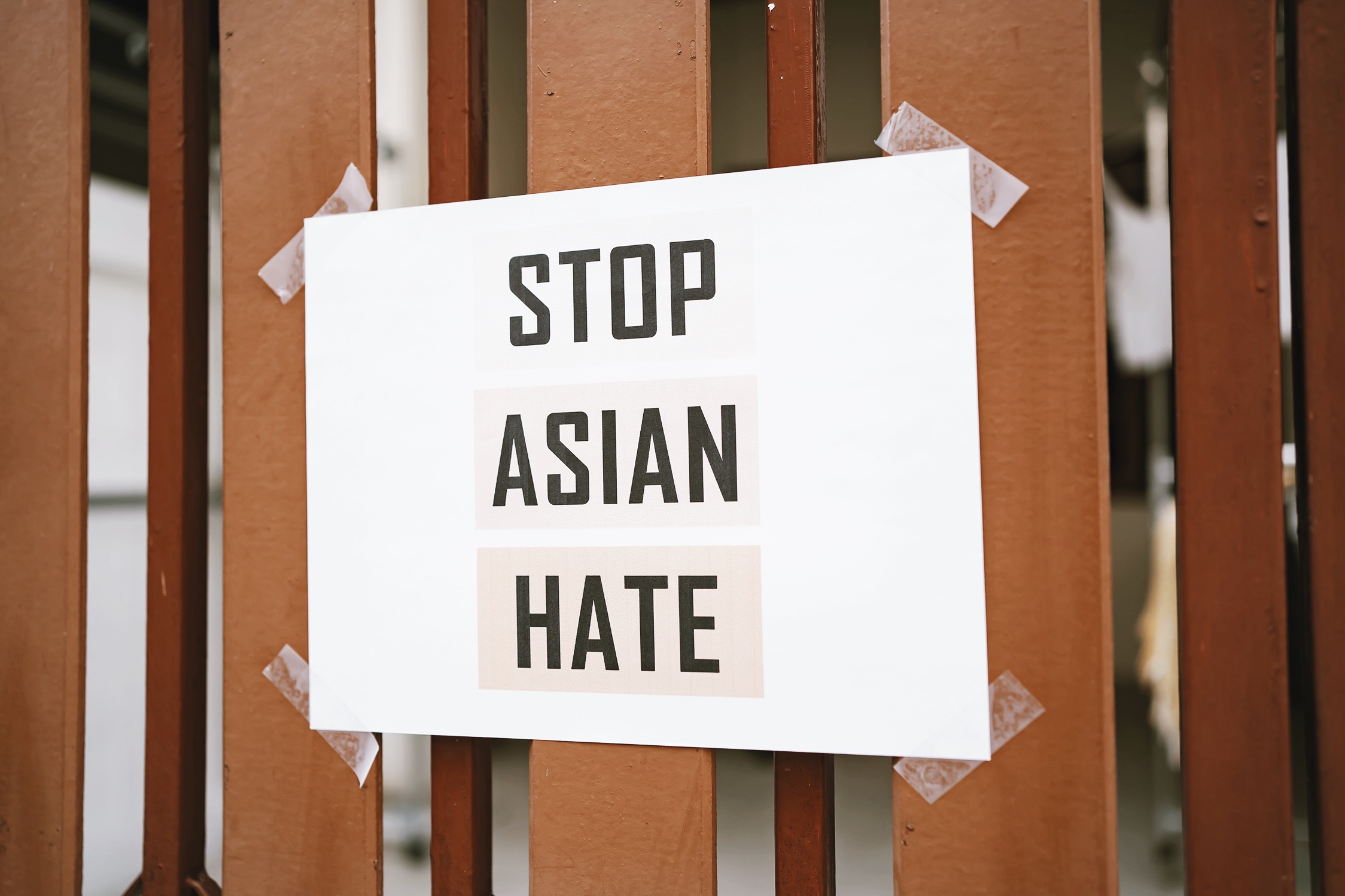 I was in line at the pharmacy when a woman approached me and sprayed Lysol all over me. She was yelling out, “You’re the infection! Go home! We don’t want you here!” I was in shock and cried as I left the building. No one came to my help. (Marietta, GA respondent to Stop AAPI Hate)

Thanks for your help on America contracting this Chinese virus as over 90 % of ALL Influenza comes from Red Communist China Party. You morons are snowflakes who have been brainwashed by the communist professors. It is so very sad to see young people taken advantage of when they show up with good values taught by GOD loving married couples to be instructed by commies. (Anonymous troller posting to Stop AAPI Hate)

While my (Russell’s) wife was running in a park last year, a stranger blocked her path and coughed in her face. Another time, my son and I entered a checkout line in a sporting goods shop. Despite maintaining physical distance between us and the next customer, once he observed our Asian faces, he deliberately moved to another line. In the same store, another long line of customers waited to purchase ammunition. The juxtaposition of these lines conjured a harrowing thought: “Others see my teenage son as a threat. Even more are arming themselves against it.”

As the above anecdotes show, my experience is hardly unique. And as the horrifying Atlanta shootings on Tuesday illustrate, my fear for our safety was far from unwarranted. Not only are Chinese scapegoated as carriers of infection, but we also are seen as the infection. Indeed, Asian Americans are America’s latest lepers. Shunned and feared by Christian nationalists, we threaten the nation’s physical and spiritual purity.

The trauma of hate does not stem from a handful of individuals. Stop AAPI Hate, a hate tracking site I (Russell) founded this past year, has received 3795 firsthand accounts of anti-Asian racism between March 19, 2020 and February 28, 2021. At least 2.3 times more women reported discrimination than men, a statistic tragically displayed by the deaths of 6 Asian women on Tuesday. Furthermore, 75% of us are anxious about the hate funneled towards us. While law enforcement is still investigating the motives, the fact remains that almost all the victims were Asian and the sites of attack were Asian-owned businesses; furthermore, the Korean newspaper Chosun Ilbo reported an eyewitness statement that the killer explicitly expressed an intention to kill Asians. Even the killer’s statement that he was driven by an urge to “eliminate” the source of his “sexual addiction” begs the question of why these particular bodies seemed so especially threatening to his sense of chastity.

Animosity towards Asian bodies in America certainly predates COVID-19. In the late 19th century, whites used fear of smallpox, malaria, and leprosy, not to mention economic competition, to justify the Chinese Exclusion Act. When the bubonic plague menaced San Francisco’s Chinatown in 1900, the neighborhood was placed under quarantine, with Chinese confined to barbed wire while whites retained mobility. From 1910 through 1940, officials at Angel Island Immigration Station subjected Asians to arbitrary health screenings, detaining and sometimes deporting those deemed unfit. The popular phrase “heathen Chinee” in the late 19th and early 20th century reminds us that, at this time, Chinese bodies signified vectors of both physical and spiritual disease. Resurrecting the Yellow Peril stereotype, President Trump’s choice last year to racialize the disease as the “Chinese virus,” over and against the CDC’s warnings, incited a spike in hate. Although the United Nations denounced Trump for “seemingly legitimizing” xenophobic attacks, such legitimation is precisely what the president wished to accomplish.

Furthermore, as we have written elsewhere, Christian nationalism, supported by almost half of Americans, underpins the anti-Asian rhetoric driving the above statistics. For this exceptional nation to receive blessing, politicians and ministers declare, it must repel polluting, foreign invaders. The murder suspect’s church belongs to the Southern Baptist Convention, a denomination whose opposition to “critical race theory” has attracted considerable controversy, and which boasts among its ranks pious patriots like Sen. Ted Cruz, Sen. Lindsey Graham and Rep. Kevin McCarthy. With their authoritarian orientation and zeal for geopolitical and racial boundaries, such Christian nationalists support Trump, favor family separation and stricter immigration policies and reject Black Lives Matter. Inevitably, recent studies found that Trump’s pious base overwhelmingly does not regard “Chinese virus” as racist. At the start of COVID-19’s second year, devotion to God’s chosen nation (and leader) involves sanctified Sinophobia – the religious legitimation of xenophobia against Asians.

Just as Nehemiah built walls to defend Jerusalem from foreign influence, they argue, the U.S. must build Trump’s wall to preserve the nation. Unsurprisingly, the antithesis to “real Americans” (read: white, heteronormative Christians) has become the disease-carrying, godless Chinese. We, and Asian Americans in general, are to be disinfected, disbarred and demonized. No wonder that anti-Asian hate has only increased as the pandemic has worn on, with a the recent vicious spike in attacks against the elderly and women culminating in Atlanta’s massacre.

Perhaps the best biblical parallel to our current position is the leper. Rather than denoting Hansen’s disease, the word translated as “leprous” (tzara in Hebrew, lepros in Greek) identified a range of milder skin diseases, as well as corollary ritual uncleanness. Abhorrence of tzara did not stem from risk of transmission, since the condition was not medically infectious. Rather, stigma originated in fear of being “infected” with moral turpitude, as leprosy denoted God’s curse for impiety. If their features didn’t distinguish them, lepers had to wear bells to warn of their presence, lest they defile society. Astonishingly, like today, Leviticus 13 required face masks for the infected; the Talmud ordered at least six feet of distance from others.

Like lepers, Asian Americans today are associated with spiritual corruption, not just coronavirus. The very Christian nationalism prompting jeers of “Chinese Virus” does not prompt medical precautions; instead, holy warriors stress “ increas[ing] America’s collective devotion . . . and repenting of national sins.” For them, the “infection” carried by Chinese merely displays the “infection” of unholiness (communism, idolatry, “cheating and stealing”) that ancients strove to avoid. The bully who spraypainted “JESUS” at a Buddhist temple may simply have been practicing the Christian nationalist version of hygiene.

Such vandals dishonor the name they blaspheme. Jesus’ approach to lepers flaunted His nation’s regulations, His religion’s codes and His race’s sense of purity. Nowhere is this more evident than in Luke’s gospel, where ten lepers, including a Samaritan, receive miraculous healing. That only the Samaritan leper returns in gratitude is significant: as a Samaritan, he would have been doubly ostracized by Palestinian Jews, who regarded Samaritan theology and ancestry as inferior. Similarly, Asian Americans are now twice marginalized for what they signify: godless heathens and racially diseased.

This “foreigner” (Luke 17:18) was keenly aware that, through Jesus’ healing touch, the latter became defiled so others could be healed. Transgressing the border between purity and polution, Jesus welcomed a body marked as diseased and “heathen” into community.

To follow His example, we call on Asians and their allies to support this open letter (currently at 550+ signatories and growing) condemning the nexus of Sinophobia, Christian nationalist politicians and enabling churches. In so doing, may Jesus’ disciples embrace xenophilia as the cure for xenophobia.

Dr. Lucas Kwong is a writer, musician, and assistant professor of English at New York City College of Technology. He’s written at eschatontwist.substack.com, Public Books, Journal of Narrative Theory, and Victorian Literature and Culture. He is also assistant editor for New American Notes Online. His music can be found at brotherkmusic.com. He lives in Brooklyn with his wife.

Dr. Russell Jeung is author of At Home in Exile: Finding Jesus Among My Ancestors and Refugee Neighbors. He’s co-founder of Stop AAPI Hate, a center that tracks COVID-19 discrimination and proposes policy interventions.

A Church Paid Off All of New Mexico’s Medical Debt