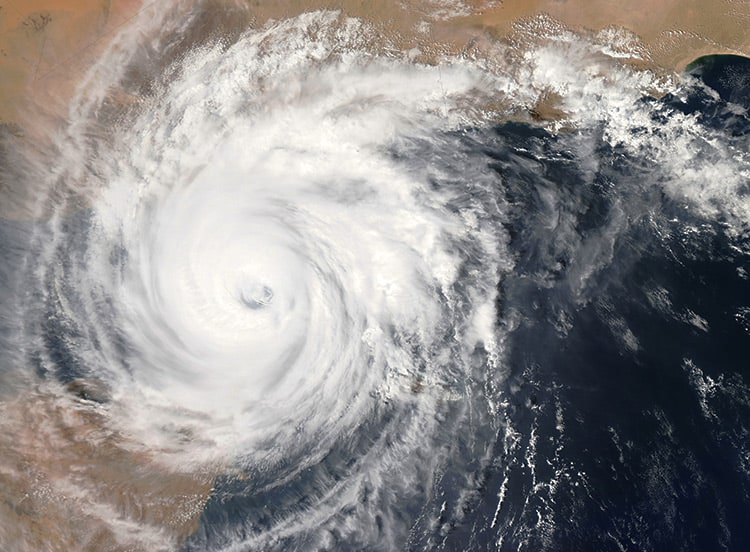 During the past few weeks, storms have ravaged parts of Texas, Florida and parts of the Southeast. Whenever these kinds of natural disasters occur, questions about God and His nature are sure to follow.

Honestly, I didn’t like either of these perspectives. I didn’t like the first because it had a self-justifying intent–God is judging them because they are sinful, unlike us. Instinctively, I was repulsed by this idea.

At the same time, however, I was not satisfied by the common but simplistic response: “Katrina is not God’s judgment on New Orleans because God doesn’t do that. God loves people.” Can we automatically rule out any connection between natural disasters and God’s judgment of humanity?

From the beginning of the Bible to the end, natural disasters are, in fact, one of the ways God’s judgment on humanity is executed. From Noah’s flood to the plagues of Egypt, to the prophetic predictions of the moon turning blood red and the sun being darkened (and all manner of other catastrophic natural phenomena), the writers of the Bible understood God to use natural phenomena (in addition to sociological, economic and political phenomena) in order to judge humanity. To simplistically rule out any possible connection between a natural disaster and a judging intent on God’s part is to ignore a whole lot of biblical passages.

Both responses to hurricanes had, at their core, a particular understanding of God’s judgment, namely that God’s judgment is essentially what God does when He gets so fed up with human sin that He just cannot take it anymore. This is the slow-burn god, the god who has patience, but over time he starts to clench his jaw, his face starts to turn red, and he develops of nervous twitch above his eye. Finally, he throws his hands up in the air and, with a maniacal cry and uncontrolled rage, takes a swipe at the offending earth creatures and BOOM—instant hurricane or earthquake or tsunami or tornado or whatever.

But that is not the biblical picture of God’s judgment. First and most importantly, we must understand that when God judges, there is always a constructive purpose in it. God never judges just because He gets overwhelmed by rage at all the sin and loses control of Himself. In fact, such an act of punishment would not even really qualify as “judgment” in the biblical sense. Judgment is not identical to punishment or condemnation. It can include punishment, but biblical judgment is a much bigger and, I would argue, far more glorious concept.

Then what is “judgment” in the biblical sense?

Judgment is discernment. It is separation and distinction: the separation or distinguishing of light from dark, day from night, good from evil, sheep from goats, wheat from tares. It is bringing order out of chaos, and as such it is fundamentally a completion of the act of creation (God separated the darkness from the light, He separated the waters above from the waters below, He separated dry land from the seas).

Ultimately, once everything is made clear through God’s judgment, the result of true judgment will be that God’s righteousness over against the world’s unrighteousness is plainly and undeniably evident, then what cannot or will not be redeemed for His purpose will be dealt with. Exactly how it will be dealt with is not fully for us to know, but the Bible speaks of it in strong language and terrifying images.

And contrary to what many popular Christian teachers might think, the primary intent of this strong language and these terrifying images is not to threaten you into repentance. It is to comfort you and to express our belief that God is a righteous God who, though unimaginably patient, will not let evil persist indefinitely. God will deal with evil not because He is an angry and vindictive God, but precisely because He is a good and loving God.

The right version of our original question is this: In natural disasters, is God judging humanity?

Absolutely, because He is always judging humanity, if we mean by the word “judge” the accurate and biblical sense. Because this is what judgment really is. Sin that is hidden deep in our hearts cannot be dealt with so long as it remains concealed beneath layers of rationalization and illusion.

So God uses things like hurricanes Harvey and Irma to judge us, to unearth those feelings, biases and unhealthy ideas that we have buried deep within us so that we can face them and repent. If we are broken before God and receptive to this process, it turns out that God’s judgment is actually for our benefit.

2 Ways God Is Judging Me Through Harvey

So, here we are in the immediate aftermath of Harvey, and now we find ourselves facing the question, was God judging us through the storm? In a sense, yes. Not necessarily punishing us, not condemning us, but judging us, yes. As someone who lived through Harvey in the Houston area, let me illustrate that by describing how I think God has judged me using the storm.

1. I feel like I have been confronted with my attachment to my material possessions.

As the storm approached, we just didn’t know whether we would be flooded here in Crosby, and if so then how severely. Then we began to see reports of significant flooding in the areas west and southwest of Houston, several feet of water that would ruin anything on a bottom floor of a building (at least). And I started trying to figure out how much of my stuff I could put in my car if we had to evacuate.

The main things that we own that we consider extremely valuable are our books and the data on our computers. As far as our books go, I’m not just talking about a bunch of paperback novels that you could replace for a dollar each at a used bookstore. I’m talking about books that might cost a hundred dollars or more each to replace, or even books that are irreplaceable. Those kinds of things are irreplaceable, and trying to figure out how I might be able to save them in the event of a flash flood was causing me a lot of stress.

Honestly, I might have been tempted to do something foolish, to make excuses for risking my life, in order to preserve these material things that I value so much. I’m not suggesting that owning these books is a sin or that they are somehow forming a barrier between me and God. But through the storm I came to realize just how attached I really was to them, and I have to ask myself if maybe I’m not too attached to them.

2. I was confronted by the weakness of my capacity to love people.

What I mean is this: The devastation and suffering that I could see people were going through and were going to be going through over the next several weeks and months very quickly overwhelmed me. I feel that, as a Christian, I am called to suffer together with the world and to proclaim the Gospel of Jesus Christ in that suffering.

But during the storm, as I tried to grasp the scope of the devastation and the suffering, I found myself reaching the limit of my ability to extend my concern to people far more quickly than I would have liked, and in those moments I found myself reflexively pulling back and seeking distraction in something—a book, a video game, some other pastime—just to keep myself from dwelling upon just how much people were suffering. I wasn’t planning ways to go out and help people once the storm was over; I was finding myself being thankful that it wasn’t me.

If you think back to the events of the last several weeks, with Hurricanes Harvey, Irma and Maria, with the earthquake in Mexico, the fires in Montana, Washington, Oregon and California, I’m sure that you can see ways that these events confronted you with your weaknesses and limitations, whether you live in an affected area or not. This isn’t televised condemnation of the morality of this city or that, but this is a kind of judgment. And yes, this is God judging us through these natural disasters.

The good news to us is that this judgment is not condemnation. It is not punishment. It is an opportunity. God has judged us so that we can, in a new and exciting way, come to know His heart and ours.

is an assistant pastor of a small church in the Greater Houston area (the Pentecostals of Crosby), an online adjunct professor of Old Testament with Fuller Theological Seminary, and a published Old Testament scholar (my writings have been published in Brill's Biblical Interpretation series, the Journal of Biblical Literature, and the Expository Times, to name a few). I also have a blog, "Bite-Sized Exegesis" (http://bitesizedexegesis.com).