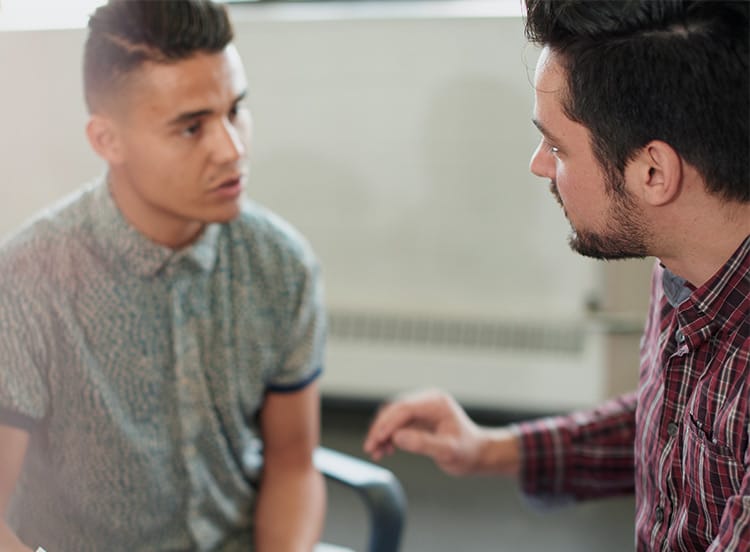 Recently, I’ve had a series of troubling conversations with Christians. One was with the grandfather of a young man who is just launching from home. They’re both African-American men, which as the mother of two myself, I know they register for some as an endangered segment of the populace.

As we spoke about the young man’s baby steps of progress, the patriarch did something I call “love by worrying.” He gave voice to every one of his greatest fears for this young man, saying, “He doesn’t know it, but X will happen and they’ll do Y to him and they’ll also do Z to him, if he’s not careful.”

The next day, I was talking with a longtime Sunday school and Bible study teacher who is in her 60s. Fixated on the headlines, she went on and on about how 2017 America’s got nothing on Sodom and Gomorrah, how this administration will create a race war and how Jesus is coming back with a quickness. When I tried to steer the conversation to a place of appreciation for new levels of consciousness, activism and compassion, she was having none of it.

These people are both prosperous, beloved leaders in their families and their communities. They are both healthy and have much to appreciate about life. But this was their speech. These were their declarations.

And they are not alone. I am a God-believer living in a place where most people I know identify as spiritual but not religious. I have a novel vantage point from that gap, and I just want to call it like I see it, in the interest of inserting a big, thoughtful pause before the next time you speak about yourself, your loved ones, your future or your country: Christians are cursing America.

Bright side: Christians can bless America, too, if we turn our words in that direction.

The Bible clearly states that each and every one of us has the power of life and death and that we  wield that power in our tongues. The non-Christians in my life tend to be pretty deliberate about what they say. But I’m hearing many of the Christians I know use the power of their tongues to declare what the news says, despite the fact that most days, the news contradicts God’s word.

For example, God’s word says the children of the righteous will be mighty in the land. God says His help is always on the way. God says we’ll move through the valley of the shadow of death, not pitch a tent and build an affordable housing development in it. God says we will live and not die. Our God says He will give us strength and that no weapon formed against us will prosper.

So I’m convinced of this fundamental truth: If Christians got as fired up about declaring the promises of God over our children, our communities and our nation as we get fired up about headlines and declaring destruction, this nation would be an unstoppable force for love and we would be overtaken by the blessings that are already trying to overtake us.

Here’s the hard part: In order to change this catastrophic Christian-speak, we must first acknowledge it, then be honest in our own hearts about the payoffs we get from this behavior. Do we bond with each other in rumination about what we see as the coming ruination? Do we feel superior to others because we think we have it all figured out and we have the spiritual upper hand? Do we speak curses over our nation in despair and out of fear? Do we feel like if we predict and prepare ourselves for catastrophe, we’ll somehow be less damaged by it (if and) when it comes?

Or maybe it would just require more energy to stop being swept up in the headlines than we believe we have the power to exercise. Our emotions, thoughts and words are all, at their essence, practiced habits. It feels like we have no control over them, but the truth is that we were conditioned and wired and practiced our way into them, and we possess the power to rewire the way we think and the things we say, too.

It does take courage, though. I’ve learned that I sit down in the few moments right after I wake up and declare God’s promises, if I take those next few moments to savor and appreciate the stack of miracles that comprises my life, traumas and all, I prime myself to think and speak with deliberate direction the whole rest of the day. And more thoughts of love and life and inspiration flow to me.

I’ve also learned that from that point of inspiration, I can have more influence on the people around me and on our world than from any point of fear, judgment, criticism or sky-is-falling prognostication.

Biblical authority is clear on how worthy God deems us, and the unbelievable purity of His love for literally every hair on our heads. The only thing that can get between God and His love for us is us. And when we speak death but pray for life, that’s what’s happening: We stand at a spiritual standstill. We don’t see the progress we could see, we don’t see the world we could be creating come to pass.

We pray for our nation and for our children on Sunday morning, but spend the rest of the week wielding the power of our words in opposition to that. What we focus on, grows. Why not focus on the promises of God for our lives, our children’s lives and our future?

One of the most quoted bits of 1 Corinthians 13 reads: “When I was a child, I spoke as a child, I understood as a child, I thought as a child; but when I became a man, I put away childish things.” Whether you are 20 or 60, it is childish to use your words without thought.

And it is a sign of spiritual maturity to practice guarding your tongue and using your words to declare life and well-being and prosperity. It is also a life-giving practice, a practice which aligns us with the creative power and force of our God, allowing it to flow through us in this realm, in this season. In this country. In this family.

So consider this my rallying cry to us as a collective to recalibrate our conversations, to speak life. Our God is greater than everything. Not a few things, everything. Tyrannical rulers have been around since the dawn of time. What is new, though, is the unending, seemingly inescapable firehose of troubling headlines and information we receive now online and on our phones.

But you have the power to resist. Decide to no longer unconsciously or despairingly join the power of your thoughts and your words with the forces of darkness by declaring death, destruction and chaos. Use your words to speak life. Use your words to speak love and healing. Start in your meditations, thinking on the innumerable blessings you benefit from, every moment of every day. Start in your own journal. Start in the way you talk to yourself and to those you live with, those you work with. Practice declarations of favor, well-being, justice and thriving.

Learn a few phrases that fill the room with the energy of life and love. If you can’t say anything nice, just say: “It is what it is” and change the subject. Experiment with saying loving, positive things, even if you have to get creative. Get ready for some awkward moments, as you’ll almost certainly find yourself as the lone life-speaking voice in many conversations. But over time, you’ll find more and more people wanting to sit with you, to spend time with you, to be around you, once they learn they can count on you, consistently, to speak life.

is the author of The Transformational Consumer: Fuel a Lifelong Love Affair With Customers by Helping Them Get Healthier, Wealthier and Wiser. Tara is an Entrepreneur in Residence with Lightspeed Venture Partners and the former VP, Marketing for MyFitnessPal and Under Armour Connected Fitness.  Join Tara’s 30 Day Writing Challenge for Conscious Leaders, free, at www.taranicholle.com/30-day-writing-challenge/.