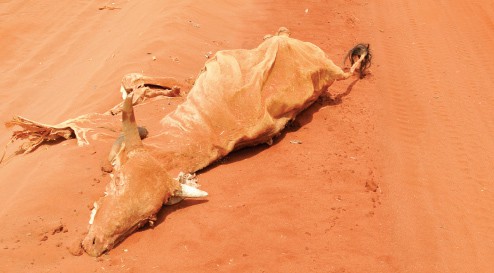 A severe drought would wreak havoc any-where. But in the Horn of Africa—a land now trademarked by high food prices and armed conflict—the dry months have reached a new level of destructive power. First, the crops and livestock began to die off; now, the people are following suit. Th e nations of Kenya, Uganda, Ethiopia and Djibouti have been affected, but by far, the suffering has been felt most deeply in Somalia. In late July, the United Nations made the call—for the first time in more than 20 years, Somalia was experiencing a famine.

What makes a famine? According to UNICEF, an emergency reaches famine levels when 20 percent of families face extreme food shortages and wasting rates rise above 30 percent in children under 5 years old. By May and June, these two statistics were already evidenced in the region, but it’s not the lack of food that determines a famine title; it’s the loss of people. The mortal-ity rate in Somalia has now exceeded two deaths per 10,000 people per day—four times the average death rate in groups with food security.

Despite opposition from Islamic extremist group Al-Shabaab, organizations have risked security to bring aid to rebel-run areas—and they can’t aff ord not to. According to U.N. humanitarian coordinator Mark Bowden, “Every day of delay in assistance is literally a matter of life or death for chil-dren and their families in the famine-affected areas.”