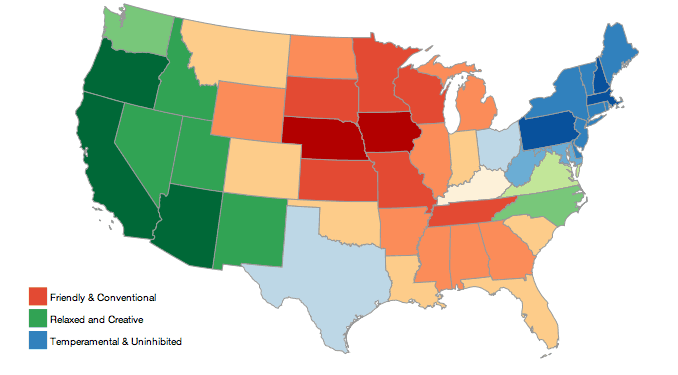 Thief Returns Stolen Computers to Church with Note: ‘Forgive Me’

A team of researchers from the UK recently published the results of a 13-year study, in which they surveyed more than 1.6 million people across the U.S. to determine how to classify each state by mood. Their findings, published by the Journal of Personality and Social Psychology, have been used to create this “American Mood” map, color-coding the country by overall attitude. As you can see from the image below, the Northeast is the most “Temperamental & Uninhibited” (Blue) (meaning you’ll probably get yelled at in traffic). The West Coast ranked as the most “Relaxed and Creative” (Green). And middle American is mostly colored in different shades of Red representing levels of “Friendly & Conventional.” If you go here, and look at the interactive version of the map, you can actually see how states ranked across all of the “OCEAN” categories (Openess, Conscientiousness, Extroversion, Agreeableness and Neuroticism). Being overly dramatic was not a category, though the Californians would have ranked very high ….