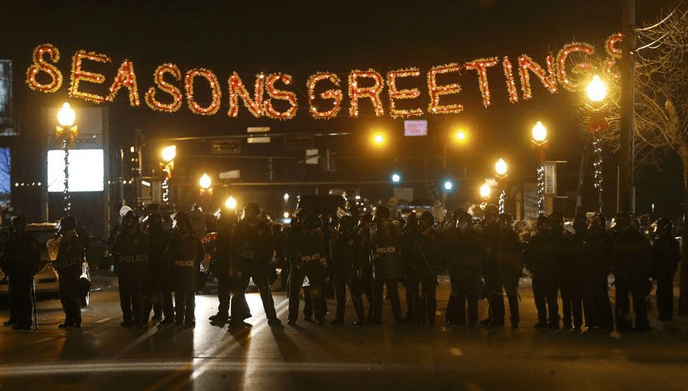 Demonstrations turned to violence and vandalism in parts of Ferguson last night as police fired tear gas and rubber bullets on protestors gathered to hear the verdict in officer Darren Wilson’s grand jury case. Soon after prosecuting Attorney Bob McCulloch announced that Wilson would not be indicted in the shooting death of unarmed teen Michael Brown and outlined the evidence presented, police and protestors began to clash. At least 29 arrests were made, numerous businesses were looted and several cars were destroyed. In other cities like New York, Seattle and Oakland, mostly peaceful protestors gathered to express their disappointment in the decision.

The way authorities handled last night’s events has led the media to question some of the decisions. Why did authorities wait until 9 p.m. to make the announcement? Numerous media outlets noted how unwise this seemed, given the summer’s curfew in the wake of clashes that occasionally turned violent. Even after three months, why did it appear that police were not given 48-hours notice about the announcement, as was initially expected? Also, police initially tweeted that officers “are not deploying tear gas. They are using #smoke to break up unruly crowds.” On TV though, reporters and crowds were clearly suffering from the effects of tear gas. It wasn’t until later that police tweeted, “tear gas was used on S. Florissant after smoke was unsuccessful in dispersing violent crowd. Smoke was used FIRST” ….