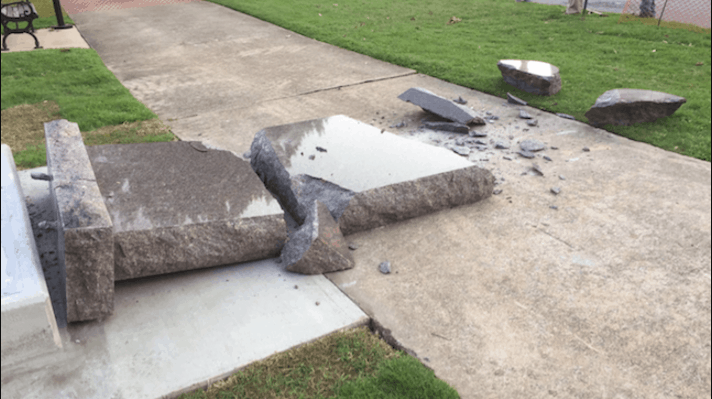 Less than 24 hours after it was put in place, a man drove his car into a Ten Commandments monument on the Arkansas Capitol grounds, destroying it.

Evidently the collision was intentional, and the man was arrested (supposedly he was recording himself while he drove). “We had some concerns, just because this was such a highly charged issue with some people,” a spokesman with the Secretary of State’s Office told Arkansas Online.

“Highly charged” is right. Republican State Senator Jason Rapert sponsored a bill to erect the monument on state grounds, which some critics suggested blurs the lines between church and state. The ACLU is putting a lawsuit together.

“By placing a monument to a particular set of religious beliefs, it appears that the state enforces one particular set of beliefs over others and over no religion,” Rita Sklar, the ACLU’s executive director, told NPR. “And it makes people who fall into those categories—no religion or other religion—feel like second-class citizens in the state of Arkansas, which they are not.”

Rapert argues that the Ten Commandments are “the historical moral foundation of law.”

“We have freedom of religion, that’s not freedom from religion,” he told NPR. “You have to remember, the State of Arkansas, through a legal process, said that they want to have a monument to the Ten Commandments for the Capitol grounds.”

The Ten Commandments, of course, have a long, cherished history of being destroyed.