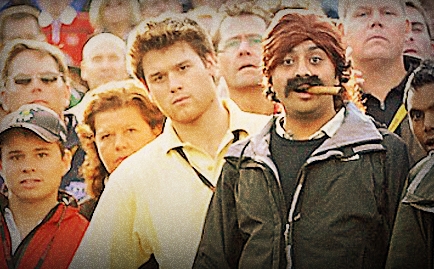 Anyone can throw on a muscle-bound Spider-Man suit or a generic store-bought pirate costume, but to really stand out at your Halloween party (or “Harvest Season Celebration”), here are eight costume ideas that won’t break the bank.

In the year when a viral video star, “Bedroom Intruder” Antoine Dodson, has an official Halloween costume, it’s hard to go wrong with a meme-themed get-up. Here are a few suggestions:

Cigar Guy—Tiger Woods’ iconic photo of a ball being misfired directly at a cameraman not only yielded
one of the year’s best photos, it also birthed one of the year’s most
memorable Internet stars. Simply referred to as “Cigar Guy,” this
mustachioed gent, upstaged Tiger by mysteriously appearing on the front
row of the crowd behind Woods. With his Donald Trump-style wig,
glorious ‘stache, massive stogie and fine blue leisure-suit pants, the
mystifyingly debonair fan sparked an international search for a true
identity while launching the latest meme craze of Photoshopping him
into other iconic photos. In other words, he’d make the perfect
Halloween costume. Here’s what you’ll need: a lush, dark mustache
(assuming you don’t already have one), a shaggy wig, a large cigar,
blue pants, a matching Member’s Only jacket and a sizable dose of
swagger. (Also, though it’s impossible to know just from a photo, it’s
safe to assume he smells of rich Stetson, so dousing yourself with that
wouldn’t hurt either.)

Double Rainbow—This one can be as easy or elaborate as you like. A simple T-shirt with a picture of a rainbow along with a “x 2” or two large cardboard cutouts worn like sandwich boards would suffice. This also serves as a great couples’ option, with each going as a rainbow. You can also get high-concept: for instance, each going dressed as Rambo—a “Double Rambo."

What happens when one of our multimillion dollar sports icons goes from hometown hero to a global super-villain? A Halloween costume is born:

LeBron James—Since his televised back-stabbing “Decision” turned him from beloved superstar to the NBA’s most well-known boo-magnet, LeBron James has become the ultimate sports villain. And nothing says great Halloween costume like a great villain. Just rock the Miami Heat No. 6 jersey along with your favorite villain mask (Darth Vadar, Lord Voldemort, the Joker, Spencer Pratt) and you’ve got a great sports-themed bad guy.

A-Rod—Even before his recent steroid admission, Alex Rodriguez personified what made the Yankees baseball’s “Evil Empire.” Throw on the old New York pinstripes, a Yankee cap, your favorite villain mask along with air of smug aloofness, and you’ll be the perfect A-Rod. It would also help if you could bring either Kate Hudson or Cameron Diaz along as your date to the Halloween party.

Sure, going with a current trend or the latest Internet star can prove you are a culture-vulture, but one of these classic references from Seinfeld shows you know your roots:

Kramer’s Postal Protest Dummy (with a bucket on its head)—In this classic episode of Seinfeld, Kramer, sick of receiving unwanted junk mail, embarks on a campaign to try to “stop getting mail.” (In an expectedly hilarious turn of events, Kramer unwittingly uncovers a postal conspiracy that culminates with an interrogation by the Postmaster General.) As part of his anti-mail awareness efforts, the K-man drags around a life-sized dummy, dressed in a postal worker’s uniform, with a bucket on its head—to illustrate how we’re “blind to their tyranny”. (You can watch the scene at 2:35 of this video: http://www.youtube.com/watch?v=JpUqLjjKk4Y.) All you need is a fake mailman’s uniform and a tin bucket for your head. Sure, probably only a few of your friends will get the reference, but for the ones who do, it’ll be worth it.

J. Peterman—The publisher of the eclectic and sophisticated J. Peterman clothing catalog was a world-traveling, constantly pontificating, silver-haired adventurer who became a staple of the sitcom in later seasons. For this costume, all you need is pretty much any outfit from J. Crew and a grey wig (though, an urban sombrero or piece of very old wedding cake would also make great accessories).

Got a nose for news? Consider yourself the “Anderson Cooper” of your group of friends? Then one of these current-events themed costumes could be for you:

Tea Partier—No matter what your political preference is, the Tea Party movement was an inescapable news media darling, combining grassroots activism and controversial ideology. But, even more importantly, it makes for a great last-minute, cheap costume option—by far the cheapest costume on the list (assuming you don’t already look exactly like the cigar guy). All you need is a black T-shirt and one of those cone-shaped birthday party hats with the elastic chinstrap. When someone asks what your costume is, simply extend both of your arms outward (making a “T” shape).

Upside-down House—On a fun, careless evening like Halloween, there’s nothing like reminding fellow party-goers of the unfortunate reality of a weak economic outlook, fueled by falling home prices. For this socially aware costume, all you need to do is to create a house with cardboard and magic markers and wear it upside-down—because nothing says “scary” like a mortgage that’s greater than the actual value of a home! (Side note: This is the third most popular costume of NPR listeners, right behind Ira Glass and an obscure character from a David Sedaris essay.)

Is Halloween Good or Evil?