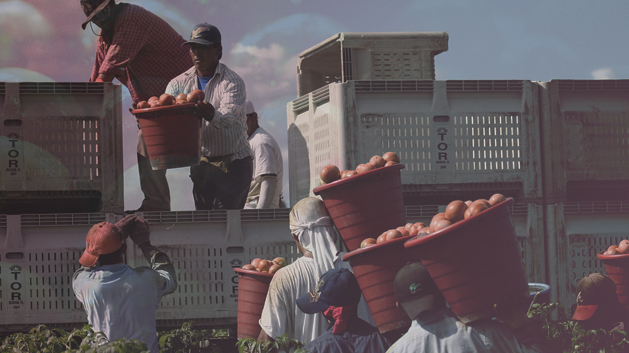 The air is crisp, the leaves are changing and farms are being trampled by  kids as they scout out the perfect pumpkin to carve. It’s autumn—and with the changing of the season comes the end to the summer crop. No more sweet corn, fresh berries, just-picked asparagus or tomatoes.

Well, check that last fruit. Tomatoes have become a year round crop thanks to farmers in Florida who have figured out how to conjure up tomatoes during winter out of sandy soil that could never grow much of anything. While the rest of the spring and summer fruits and vegetables will not be fresh until next year, there will always be a nice selection of bright red tomatoes at your local supermarket or burger place all the way through winter and spring.

And usually these fruits can be traced back to Florida—which provides 90 percent of America’s tomatoes during the winter season.

Over 90 percent of the country’s winter tomatoes are grown and handpicked in the Florida growing region. It’s no secret that working in agricultural fields can be treacherous for any migrant laborer.

If any single statistic can capture the hard and dangerous life that most migrant workers live, it is this: In a wealthy country like the U.S., where the average life expectancy is 78 years old—the life expectancy of a migrant worker is 49 years, according to the Oregon Department of Human Services.  And some of the men and women laboring in these fields are not treated like workers at all—some have been held as slaves.

There have been seven legal cases over the past 15 years in the tomato region of Florida that have freed over 1,000 slaves held in bondage and forced to work in the tomato fields. While every case that has been successfully prosecuted deserves a celebration, the long-term key to transforming the entire industry is to ensure a basic foundation of transparency, security and fair wages supported by all of those companies that purchase these winter tomatoes.

Yet some are working to change this industry.

In partnership with the farmworkers in the Immokalee area of Florida, International Justice Mission (IJM) launched Recipe For Change, a campaign to educate and advocate for guaranteed slave-free tomatoes. Through a petition drive, a family curriculum and featured recipes from food writers like Mark Bittman and Michael Pollan, IJM Justice Campaigns is raising awareness about the Coalition of Immokalee Workers’ (CIW) Fair Food Program.

The logic behind the CIW’s Fair Food Program is clear: Workers are no longer to be forced into labor and every worker is entitled to a fair wage.

Though the Fair Food Program was a tough sell to large corporations at first, many have come to realize the value of partnering with the CIW to ensure that every worker is treated fairly and to guarantee that forced labor is a thing of the past in Florida’s fields.

Companies like Yum Brands (KFC, Taco Bell and Pizza Hut), McDonalds, Burger King, Subway, Chipotle, Whole Foods and Trader Joe’s have signed on to the Fair Food Program. This means that if you are buying food containing fresh tomatoes at one of these restaurants or stores, you know for sure that you are not buying tomatoes that have been picked by slaves.

Yet there is more work to be done. Some of America’s largest grocery store chains— including Publix, Kroger and Ahold (Giant, Stop & Shop, Martin’s)—have not signed on to the Fair Food Program yet.

While some chains have adopted their own standards, perhaps the best way to protect the workers in Immolokee is for every major purchaser to sign on to the Fair Food Program—guaranteeing that all tomatoes harvested in the region meet the same high standards.

The recipe for change is simple: We buy tomatoes that are guaranteed free from modern-day slavery and other abuse and make sure that our dinner tables and take out dinners are graced with ethically harvested tomatoes.

Could Both Obama and Romney Win?