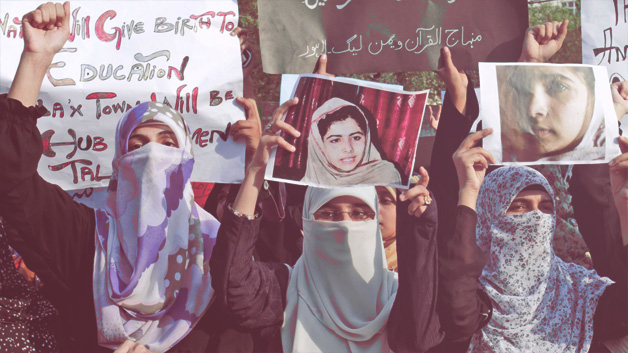 Just three hours from Islamabad lies the Swat Valley—known as the “mini Switzerland of Pakistan.” With snow-capped mountains, rushing rivers, clear lakes, deep forests and green meadows, Swat Valley was a popular tourist destination before the region was captured by the Taliban insurgency in 2008. The extremist group, headed by militant leader Maulana Fazlullah, banned public education for girls and torched more than 170 schools, mostly for girls, as well as other government buildings.

In 2008, shortly after the insurgency, 11-year-old Malala Yousafzai, the daughter of educator and poet Ziauddin Yousafzai, wrote a blog for the BBC detailing her life as a Pakistani schoolgirl under these conditions. After 10 weeks, she discontinued the blog when her family left Swat Valley due to the launch of a military operation to end the insurgency. Once the Pakistani army regained control, Malala and her family returned to Swat Valley in late 2009 and she began speaking publicly about girls’ right to education, winning a national peace prize for her fierce advocacy.

On October 9, 2012, Malala was gunned down and critically wounded by two members of the Taliban while on her way home from school.

“We do not tolerate people like Malala speaking against us,” Taliban spokesman Ihsanullah Ihsan later said. Malala, who knew she was on the TTP hit list, dared to do something that the world’s most powerful authorities are reticent to do: use her voice to criticize the Taliban and defend the rights of girls’ to an education. She willingly put herself in danger for the sake of others.

Malala had long known the power of her voice. In 2011, a CNN reporter asked her, “Why do you risk your life to raise your voice?” Malala answered, “Because I’ve been taught that people need me and I should raise my voice because if I don’t … who will?”

Malala wasn’t a threat because she was an armed militant or a powerful authority. She was considered a threat by the Taliban because she utilized the power of her voice.

The currency of the Taliban is fear, but Malala is courageous and unbending to fear. She is a living, breathing advocate for education—and education is an anathema for the Taliban, whose power thrives in uneducated, illiterate societies.

And it is her courage—her valor—that lends power to her voice. Likewise, courage is also cultivated when underprivileged women find their sense of voice.

In neighboring Afghanistan, the worst country in the world in which to be a woman, women are discovering the power of their voice through the Afghan Women’s Writing Project, which aims “to empower women to tell their own stories and truths.” Some women walk hours to the undisclosed locations in Kabul or Herat to share their work and to attend reading salons and writing workshops.

By courageously raising their voices to share their stories with the world, these women are gaining the confidence they need to make choices that better their lives. These women are becoming parliament members, lawyers and journalists. Slowly, women’s voices are becoming part of the national dialogue in a realm where they have long been told to stay silent.

The challenges of Western women are, admittedly, minor compared to the challenges that young women like Malala face, but if you think that women’s voices are no longer being suppressed even in 21
st
century America, it’s time to think again.

In a recent interview, author V.S. Naipaul stated that no woman was his literary equal—not even “sentimental” Jane Austen—because of women’s “sentimentality, narrow view of the world and inevitably for a woman, she is not a complete master of a house, so that comes over in her writing too.”

Is it any wonder that in a climate like this, so many women are afraid of speaking their mind or letting their voice be heard? Yet the world needs to hear the voices and stories of women and women need the courage—Malala’s kind of courage—to share them.

In Roman Catholicism, courage was understood to be so pivotal to the Christian life that it was considered one of the four cardinal virtues and the virtue upon which all the other virtues were founded. As C.S. Lewis wrote, “Courage is not simply one of the virtues, but the form of every virtue at its testing point, which means the point of highest reality. A chastity or honesty or mercy which yields to danger will be chaste or honest or merciful only on conditions. Pilate was merciful until it became risky.”

As it’s been said before: Courage is not simply the absence of fear, but the force of moving forward despite fear.

Without courage, without valor, the stories of women are lost, and the world is impoverished because of their exclusion in the global conversation. And when half of the world’s population is silenced, a litany of injustices result.

But God can work powerfully through a single life, and all it takes is one to start speaking. Malala did—and the global conversation she sparked about girls’ education stands to testify of the power of single person’s voice.

Dr. Halee Gray Scott is an author, scholar, and researcher. Her research and teaching focuses on theology, spiritual formation, and leadership. Her articles have appeared in Christianity Today, Real Clear Religion, Cooks and Culture, Her.Meneutics, Kyria, Gifted For Leadership and Outcomes. She blogs at www.invisiblearmyproject.com.

The Mark of a True Leader

What Character Will Stephen Colbert Play in “The Hobbit?”