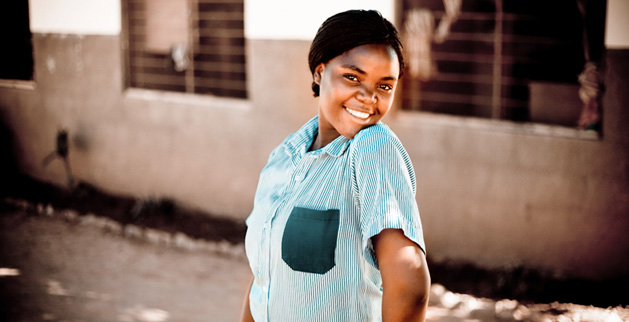 Fighting for Mothers in Sudan

She reminded me so much of myself when I was 14 years old: the attitude, rolling of the eyes and smart remarks. When we met in Zambia last year, I saw something in her—that behind the attitude was a quiet insecurity. There was something about her that seemed to scream out in silence and the attitude was only a facade to mask the pain. I remember one night, we were walking home from dinner at a neighbor’s house. She held my hand and leaned in close.

She whispered, “My stomach is in pain.”

“Was it something you ate?” I asked.

“No, it hurts like this every day…since I was 13—a really sharp pain as if someone is stabbing me.”

“Have you ever gone to the clinic to get it checked?”

I stopped behind the rest of the group and looked at her in the eye.  Her eyes diverted from mine.

With a sigh to muster up her courage, she began:

“OK, I’ll tell you my story—but I hope you will understand.”

On her way home from school one day, she was attacked by three men who had knives. They approached her saying, “If you don’t come with us, we’re going to slaughter you.” They took her to a nearby bush; one man raped her. They attempted to gang rape her, but she found a piece of metal on the floor, hit them off and fled. She told me the experience was unbearably traumatic and she couldn’t tell anyone what had happened because of the stigma of rape in Zambia. She feared not only the perpetrators but rejection from her community as well. Feeling overwhelmed with a burden, she could not share, she overdosed on medication. When that didn’t have an effect, she went to the kitchen and took a knife to her wrist.

She showed me the scar that ran deep.

Jean’s hope was to go to school in a secure environment away from slum life which was a daily reminder of what happened on her way to school that morning. She doesn’t want any other girl to go through the sexual abuse and psychological torment she was forced to confront alone. This is her dream: that she would become a voice for other survivors of rape and that her story would become a thread of hope for others.

Overwhelmed with her story, I just hid in the bathroom that night and cried out to God. Because I identified with Jean so much, I realized how her story could have happened to me, my little sister or my best friend. I questioned God’s sovereignty and I wondered how many others girls in this world are going through unexplainable pain alone.

Where beautiful young women roam the smoky streets with piercing eyes and painted lips amidst poverty unlike anything I’ve seen before, was a peaceful oasis—a small business full of women humming, singing and conversing with laughter. The sound of freedom.

I was in Kolkata, India, a few weeks ago visiting with Word Made Flesh programs in the red-light areas. In 2006, Word Made Flesh started Sari Bari, which offers freedom to women who are trapped in the sex trade and opportunities for women vulnerable to being trafficked. They employ hundreds of women seeking to renew their lives by creating handcrafted products.

I interviewed several women who are a part of Sari Bari. Their faces were beaming with pride as they spoke of their hopes, dreams and aspirations. The women in Sari Bari have a renewed sense of dignity because they are taught skills enabling them to work in a holistic environment to earn an income to care for their families. They have found community with each other and relationship with Christ.

I met a young woman there who was about the same age as me. She served me tea, and I noticed that her arm was slashed from her forearm down to her wrist. Her self-inflicted wounds were evidence of the emotional scars induced by abuse, torment and life in the red-light district. Like Jean, she is deeply searching for wholeness which is why she finds refuge at Sari Bari.

Each day, the women come together to sew straight lines culminating into a quilt. The strands of thread, strips of recycled saris and multicolor patches are woven together to portray vivid stories of hope. Their stories of a once broken life are put together through threads resembling their lives made whole again. These are the threads that this young woman lays down—praying that her hope will pull her out of the affliction she faces.

While leaving the safe haven, I was both broken by this young woman’s story and encouraged by the other women whose spirits echo God’s heart. I wondered how many other young women are yearning to be free from captivity.

At the U.N.’s Commission on the Status of Women, I learned about various initiatives that empower rural women through the eradication of hunger and poverty. I spent some time with a friend who works in anti-trafficking efforts internationally. We were relating about the hardships surrounding the work we do. We sometimes find ourselves fighting for causes that are seemingly endless. We feel like we’re barely making a dent to combat injustice in our world, thus forming a prison of disempowerment within our minds. We unknowingly drift away from the mission that God called us to because of frustration, discouragement or opposition. But every time we find ourselves drifting farther away, God seems to pull us back up again with a thread of grace. He then reveals stories and relationships that pull together all of the dangling strands to form a union—a chord which uplifts our spirits.

Jean later told me: “After I cut myself and I saw the blood, I remembered that that was the blood of Christ. Because He died for me, I need to live for Him and to live for others. I am a survivor of rape, but God has given me more strength than I had.”

Stories like these weave together the threads of hope that I hold on to.

While the incomprehensible stories of pain, captivity and oppression may be devastating, let’s remember the stories of Jean and other women in the red-light district who are striving to live with hope.

Instead of wondering why injustice exists, let’s learn to overcome our fears with an unstoppable passion driving us to advocate on behalf of women who have experienced trauma in their lives.

Let’s cling to the intertwined threads forming a chord of justice, equality and freedom for our little sisters and best friends around the world.

Nikole Lim is the founder and CEO of Freely in Hope. She speaks on stories of women’s empowerment in Africa, the role of filmmaking and photography in advocacy and the transformational art of storytelling. Nikole resides near San Francisco and works with inner–city youth.

Fighting for Mothers in Sudan