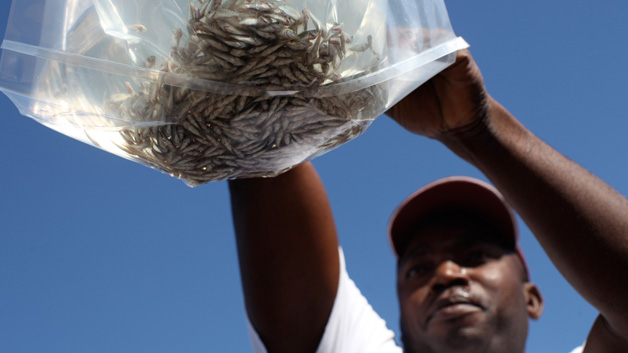 The Value of Conflict

I have been fishing and raising fish all of my life; I spent much of my summertime youth playing in and around my grandparent’s ponds, raising bass, sunfish and bluegills. I caught fish in nearby lakes, put them into buckets, and rushed home to dump them into our ponds. As I grew older, I read all the books I could find about raising fish and dreamed of someday going into the aquaculture business (farming fish or other crops that are grown in water).

I didn’t wind up in the fish business, but as head of Operation Blessing International (OBI), I’m still moving fish from place to place…only now the hobby of my youth has turned into a mission to feed protein-starved children in Haiti and to teach Haitians how to raise their own fish.

Soon after the Haiti Earthquake in 2010, OBI teamed up with Zanme Lasante, a Haitian charity founded by Dr. Paul Farmer that runs 12 hospitals and is focused on public health. We purchased land near Port-au-Prince to establish a home and training center for abandoned children with disabilities; special needs kids left homeless by the quake. We found an ideal site owned by a wealthy Haitian that had left Haiti ten years earlier. There were run-down but useful existing buildings and over 80 mature fruit trees heavy with mangos, papayas, and bananas.

OBI repaired the buildings, fixed the well, built a new 30-bedroom dorm, dining hall and commercial-sized kitchen while Zanmi Lasante organized and managed an experienced team of around 100 caregivers, trainers and therapists. We named the facility Zanmi Beni, which roughly translated from Haitian Creole, means “Blessed Friend.” For special needs kids, Zanmi Beni has become like an oasis of hope in a desert of despair.

Over a year ago, OBI bought a small turn-key tilapia-rearing facility in California. We dismantled it, moved it to Haiti and set it up at Zanmi Beni in order to raise fresh fish for our kids to eat. The tilapia thrived, the kids were fascinated watching them grow and loved the fresh fish suppers, but the facility wasn’t big enough. There were so many other hungry kids that we wanted to feed. It was like a modern day “Loaves and Fishes” story; a multitude of hungry kids but not enough fish to go around. We prayed about it and decided to make the tilapia operation bigger…much bigger.

One of the historic problems with fish farming in Haiti is that well-meaning groups try it, but no matter how hard they try… they fail. The main reason for failure in the fish business is lack of experience and expertise. Even though we were already raising fish successfully, I knew that we lacked the expertise to do it in a big way, so we secured the services of Mike Picchietti. Mike, one of the world’s top experts on tilapia, owned a hatchery in Florida and had just sold his interest in a company he founded in the early 90s that harvested 2 million pounds of tilapia filets a week.

Mike designed an expanded hatchery, nursery and fish farm for us. He spent lots of time in Haiti and supervised construction and training of our Haitian staff. The new OBI Aqua Center will yield over 50,000 pounds of fresh fish per year, plus provide large numbers of fingerlings to ensure sustainability and supply the needs of Haitians wanting to start their own aquaculture business. We will work in collaboration with the Haitian Department of Agriculture and local universities to train Haitian managers in the practice of aquaculture.

In late January, I escorted 60,000 tiny tilapia fry from Florida to Haiti. The baby fish made the trip swimming inside heavy plastic bags filled with oxygenated water, each bag inside an insulated cardboard box. The tilapia fry were donated by Aquasafra, a hatchery owned by Mike Picchietti. Mike donated the fish as the “seed stock” to get our new Aqua Center started.

Moving fish over long distances can end in disaster if anything goes wrong. Delays can result in oxygen depletion and dead fish. Our trip aboard a chartered 60-year-old DC-3 went smoothly.

Mike and the OBI Haiti team were waiting at the airport along with the Haitian Minister of Aquaculture and our contacts from Zanme Lasante. The Minister worked with customs to expedite transfer of the fish from the airport to our trucks.

Upon arrival at the Aqua Center, the plastic bags full of fish were removed from the boxes and placed in the ponds to float until the water temperature in the bags matched that in the ponds. Our team then opened each bag and poured in several quarts of pond water to acclimate the fish to the PH and chemistry of the local water and then the fish were released. All but a few were alive and acting perfectly normal. As I write this, the fish have been in Haiti for just over a month and the tilapia have grown from weighing a half gram each to over 10 grams each!

In addition to tilapia we also imported over 2,400 adult ornamentals; Angelfish, Tiger Barbs, Gourami, Platys and Corys. We purchased the ornamentals from commercial fish farms in Florida, but kept them in quarantine at Aquasafra where they were certified as disease-free.

The ornamental fish will eventually jump start a brand new aquarium fish industry that will create jobs and income for Haitians. We will train candidates and give them a starter kit including several pairs of brood fish, an aquarium, filter and some fish food. We already have orders from pet stores all over Haiti.

If we can teach a young Haitian how to raise some Angelfish on the back porch, besides earning good money, he or she will gain business experience and confidence to raise fish in a bigger way. This, together with the tilapia operation at Zanmi Beni, is how we intend to “teach a nation to fish,” and in so doing, put a dent in the poverty that is strangling the people of Haiti.

As a kid in Michigan, I dreamed of growing up and raising fish for a living. Today however, I am blessed to be helping make those dreams come true for others by raising fish and teaching others to earn a living so that they might have a better life.

Bill Horan leads Operation Blessing International, a nonprofit organization that has helped millions of people in 105 countries and all 50 U.S. states, providing goods and services valued at more than $2.7 billion and earning the ranking of one of America’s top ten “Most Efficient Charities” by Forbes magazine.