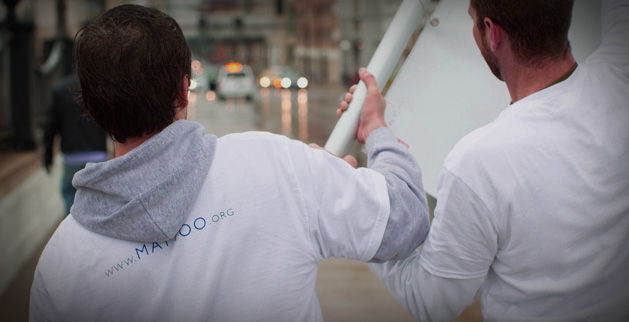 When most people find out modern slavery is still a fact of life around the world, they initially feel disbelief, followed by anger—especially upon hearing stats like the fact that every two minutes, a child is being prepared for sexual exploitation. When Andrew Hanson found out about modern slavery, he was shocked and angry. Instead of letting these feelings build within him, he channeled them and started a nonprofit organization called MATTOO (Men Against the Trafficking of Others).

MATTOO is different because Hanson is different. Hanson founded a nonprofit that aims to involve and inform men about modern-day slavery. Hanson didn’t want to create an organization that puts Band-Aids on bleeding wounds; he wanted to heal wounds and prevent new ones from ever occurring.

Hanson became aware of sex trafficking at 19 while working at a Mexican orphanage. Witnessing the harsh reality of the sex trafficking industry and coming face-to-face with its victims, he became infuriated. He saw injustice and wanted to eliminate it.

After returning to Chicago, where he lived at the time, Hanson approached multiple anti-trafficking nonprofits, intending to volunteer for the cause. He was asked two questions: “Are you a female?” and, “Are you a lawyer?” Since he was neither, Hanson was turned away. Frustrated, he felt he had no place in the anti-trafficking movement.

Hanson didn’t realize that he stepped into an ongoing dispute. “There is a debate in the movement,” he says, “that [discusses whether or not] men should even be involved.” While Hanson believes he and other men should be involved, other disagreed with him.

Nevertheless, he tried again seven years later while living in Washington, D.C. “My experience in D.C. was, unfortunately, similar to that in Chicago,” he says. “[It was] a movement predominantly made up of women with the exception of a few male lawyers.”

Hanson’s third attempt to join the movement was more successful. Four years later and back in his home state of Minnesota, he contacted Breaking Free, a nonprofit that aids women coming out of sex trafficking and prostitution. Breaking Free needed someone with knowledge on public policy, which Hanson had. He was finally able to serve the cause that he had been passionate about for 11 years.

While working with Breaking Free, Hanson’s suspicions about a lack of male presence were confirmed. “The absence of men in this movement was astounding,” he says, “and no organization existed aiming to involve them.”

Hanson didn’t realize he would be the one to address this problem. “No longer seeing human trafficking solely through books, meeting prostituted and trafficked victims escalated my commitment to help eradicate modern-day slavery,” Hanson says. “Though, I never imagined starting an anti-trafficking nonprofit was in the cards.”

After becoming deeply involved in Breaking Free and joining its board of directors, Hanson had a serious sports accident. He was bedridden for two months with life-threatening blood clots. His near-death experience motivated Hanson to examine his purpose. “While I remained bedridden,” he says, “one thought kept coming to mind: ‘If you had one year left to live, what would you want to do?’ The only desire and response I had was to help eradicate modern-day slavery.”

Driven by his new desire, Hanson decided to go for it. Even while he was still on bed rest, Hanson began the first nonprofit that specifically aims to involve men in the anti-trafficking movement.

A Time of Change

Unlike other organizations, which typically focus on the victims of the sex trafficking industry, MATTOO seeks to dig at the root of the issue. Saving women from sex trafficking will not slow down the commercial sex industry. “You save one girl,” Hanson says, “[and] another girl will just fill her place.”

MATTOO’s mission: control the demand, end the need for supply. Hanson believes men have the power to change the demands of sex trafficking. How is this possible? Looking at it from an economic standpoint, the sex trafficking industry exists because there is a market for it. A seller will sell whatever the buyer wants. MATTOO believes it is time to hold the buyer accountable.

Hanson believes men should be a part of the solution, not an addition to the problem. Their solution, he says, is to inform the public about this philosophy. MATTOO is bringing awareness of sex trafficking to men around the world, as MATTOO is setting up camp in Spain and England. By informing these men and encouraging them to publicly take a stand against sex trafficking, the demand will change.

Likewise, it is MATTOO’s vision that victims of sex trafficking will receive hope. Hanson believes that seeing men who do not want to use them will give victims the courage to seek help. “Imagine being a woman who as been trafficked and sexually exploited,” he says, “[then] seeing here’s hundreds of men, maybe even thousands of men, standing up to this. How encouraging is that for them?”

The horrors of prostitution and sex trafficking are lurking in every city in America. Organizations like MATTOO and Breaking Free are trying to free women across the world. But where does that leave you?

Nonprofits are always in need of volunteers; find one in your local area, or donate to one financially. Ultimately, never underestimate the influence that you could have: start a blog, an awareness group on your campus or in your church, or pray for the victims. You never know whom your words may influence or how far they might reach. Hanson certainly didn’t.

Andrew Hanson was just another person infuriated by one of the many horrors of this world. With a God-given passion and by connecting with the right people at the right time, he started something that will impact our world for years to come. Hanson may not free every victim, but his efforts will keep hundreds or even thousands from being added to their numbers. He believes this is his job as a man. “The real man does not exploit,” he says, “the real man saves.”