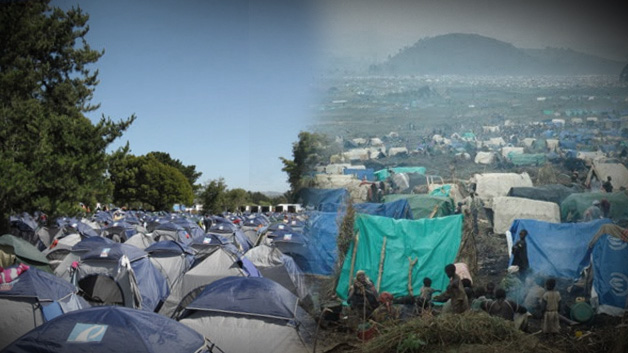 On this day in history, all the way back in 2010, more than a million people began gathering for the largest single Occupy movement of any city around the world.

Haven’t heard of it?

More than 500,000 people continue to occupy public parks, the land by the airport and nearly every inch of free space in this city. For 24 consecutive months they have been exhibiting the power of inertia to the world. The government, land-owners and private businesses are exasperated.

It is, by far, the largest continuously Occupying group worldwide.

Of course, the 500,000 people who are still left in the tent camps of Port-au-Prince never intended to be part of the Occupy movement. Rather, their occupation began in the usual way of displaced populations: A natural disaster destroyed their homes and the social fabric of their lives, and they were forced to join the uncertain lot of the nearly 25 million other internally displaced people (IDPs) around the world.

Today marks the second anniversary of the Haiti earthquake. It is a sad day for many reasons: the dancer whose legs were severed may recall the pressured spin on her toes of a passe arabesque. My friend, who began in the weeks after the tragedy to obsessively collect stones of striking composition, will find the latest one and place it on her mantle, as if by amassing these compressed layers of the ages she can rebuild the story of her buried family and put them there, too. (She lost 17 people. They were going to have a party for her nephew. Everyone arrived early.)

Life, for those who still live it, is very hard.

But what strikes me on this anniversary is something entirely different than the usual lamentations.

What strikes me is that we have half a million (at least) people in Haiti who have become a thorn in the side of their government merely because of their physical presence, and how that continuing presence places visual and vocal pressure on their government to match the most basic terms of the social contract.

“I believe Haiti, and other developing countries like it, are the next outposts of the mass movements that began in 2011.”

We also have, in Haiti, as in much of the rest of the world, disgruntled youth and unemployed blue-collar workers. We have a democratically active population (they march, they protest, they vote), and the tell-tale ingredients for future unrest: rising inequality, a lack of opportunities and, in spite of only 49 percent literacy, access to enough global information to see that there is the possibility that it could be different.

On some shared fundamental plane, the Occupy movement, the Arab Spring and the other uprisings in 2011 are fighting the same political disenfranchisement and social and economic injustice to which our global paradigm of the 21st century has descended, worldwide.

The same is true for Haitians.

What is different is that, in the West at least, we have celebrated the uprisings of the Arab Spring, and we either cheer on or vilify the disaggregated masses of the Occupy movement.

But in places like Haiti, the international community looks on with a sense of charity that is now, two years on, either dandelion-ing toward fatigue and distraction, or popping up like bubbles from fish underwater: iridescent, carefully reflecting all luminous sides and just as short-lived.

Haitians this year have been relatively peaceful, so what we have heard of their plight has inspired easy sympathy.

Not that it will be Haiti to lead the next people’s revolution—revolution requires something strong and united against which to fight, and the Haitian government is too flimsy for that.

But I believe Haiti, and other developing countries like it, are the next outposts of the mass movements that began in 2011.

Global terrorism was the first grassroots response to the unacknowledged injustices enacted in the name of capitalism and democracy. But the true groundswell response to the inequality that our society is attempting to tolerate is coming now. Not in the form of violence (though, sadly, that will continue), but in a much more elegant and simplistic formula: the biggest wins.

Half a millions is big.

“The problem in our world is not a lack of resources; it is the adequate distribution of the resources we have.”

Twenty-five million is a bit bigger.

But 5,472,405,600 is enormous. And that is the 80 percent of the world’s population that lives in developing countries and whose families are growing at a rate much faster than those of the other 20 percent. And they’re not the only ones.

What needs to be understood is that these numbers—the 500,000 Haitians here, the 5 million South Sudanese there (2005)—are proxy measures of all of the people around the world who are not being heard and whose needs are not being recognized. We cannot continue (as developed, Western, capitalist, theoretically democratic nations) to pretend it is fair that less than 1 percent of the world’s population controls nearly 40 percent of the world’s wealth. Or that families in the Congo (lush, fertile, beautiful Congo), have children who are starving to death.

The problem in our world is not a lack of resources; it is the adequate distribution of the resources we have.

On this day in 2010, more than a million people in Haiti fled their crumbled homes and became the latest group of occupiers to remind a government, and the world, that dealing with the basic needs of a million people overnight is practically impossible.

As we commemorate those who lost their lives that day, let us also remember all of those who are left—not only in Haiti, but in all the places where people have fled natural disaster and human conflict around the world. And let us remember, too, that until we deal—as an international community—with the underlying causes (and I do not mean tectonic plates) of these tragedies, the tragedies will be dealing with us, be it through terrorism or the claiming of territory.

Emily Cavan Lynch is a freelance writer working in public health and humanitarian aid. After the earthquake in Haiti she worked with a non-governmental organization tasked with rubble removal, job creation and temporary housing construction. She is currently based in the Kivu region of the Democratic Republic of Congo, helping to provide basic and emergency healthcare to populations living with frequent insecurity and ongoing displacements. She blogs at EmilyCavan.blogspot.com.

This American Life Exposes the Dark Side of Our Tech

Lessons From Leaving a Desk Job