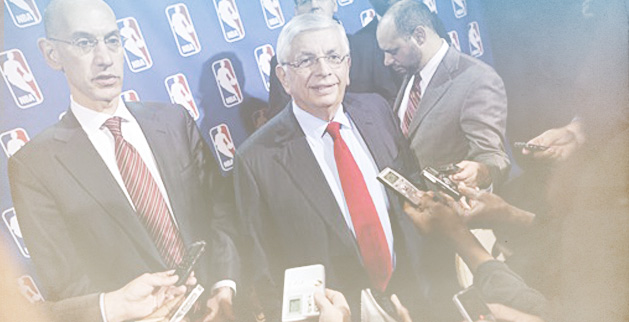 Christmas Belongs to the Poor

Imagine a conflict of interests between business, government and individual people that involves hundreds of millions of dollars. Imagine a governing body leveraging economic penalties on institutions based on whether or not they comply with specific standards that define labor in the industry. Now add a dimension of corruption at the governmental level, greed at the business level and complicity at the individual level, all working in macabre concert, to the end that every proposed solution feels like a compromise and in some ways makes things worse. Finally, imagine that the salient issue driving this entire debacle was the question of whether an individual had the right to determine whether or not they would work for a wage they felt was fair.

I’m talking about the NBA.

Complex networks of loyalty, greed, compromise, intrigue and power leveraged at multiple levels make for intractable negotiations in the world of professional sports. It would make for a great TV drama, and it actually helps us understand the global quandary of human trafficking.

For all you non-fans out there, let me offer a quick recap: In November, the National Basketball League (NBA) issued a lockout when, after months of negotiations, team owners and players could not come to an agreement on how to structure league contracts. Chris Paul, by refusing to renew his contract with the Hornets, forced his current team to make a trade while they were still in possession of a coveted player before he became a free agent next summer. David Stern, Commissioner of the NBA, who was on the verge of landing a major league restructuring that would reduce precisely this kind of power all-star players had over teams (and hence the league), stunned players, owners and fans when he nullified the trade.

This tension—between the interests of the individual versus the interests of the business owner and the question of to what if any degree a governmental position or body has the power to intervene—is a familiar one. Human trafficking is a complicated issue. But there are parallels in the recent NBA collective bargaining agreement struggle that can shed some light on why human trafficking thrives today.

Most of us have difficulty finding sympathy for a professional NBA player who is “stuck” in his contract of $10 million a year when he could be making $12 million a year somewhere else. Similarly, the global sympathy for people in human trafficking is pretty anemic because trafficking victims have to some degree gotten into slavery through their own volition. Take for instance victims forced to work in rock quarries in Pakistan: many of these people are subjected to debt bondage, the practice of forcing people  to pay off a small loan (probably less than what you’ve got right now in your wallet) by heaping on exorbitant interest and inflated costs for food and lodging. Since there is some level of complicity from the person enslaved (they agreed to take out the loan to begin with), police forces are often apathetic and slaver owners are difficult to prosecute.

NBA players stand to make a ton of money, especially when you consider that they were just awarded a salary floor that is 85 percent of the league salary cap. But more people stand to make money than just players, even those who ought to be challenging excessive salaries. When enough people benefit from a corrupt system, they offer resistance to the changes needed to correct the system because they benefit from short-term gains. In Thailand, for example, scores of young girls every year are drawn into prostitution. Most are forced to choose between either languishing in rural poverty, a disgrace to their families because they earn no money, or they hoof it to Bangkok on a lark hoping against hope that they will be statistical anomalies, able to find sustainable work besides selling their bodies despite the fact that they have no education and no job skills. What’s more, a country like Thailand with a developing economy is not in a big hurry to give the tourist industry a massive overhaul when there are so many secondary businesses that are benefitting—everything from hotels, bars, restaurants and travel—even if it would be more profitable in the long run to develop a strategy for sustainable growth.

Speculation abounds as to whether Stern had some sort of financial incentive to block the Paul trade. Governments must lead the charge by imposing sanctions, but they are not always consistent, usually because of other interests. Victor Malarek, investigative journalist, points out in his ground breaking report on sex trafficking, The Natashas, that several countries—Russia, Israel and Ukraine to name a few—avoided penalties the first few years that the U.S. State Department issued the Trafficking in Persons (TIP) report. The TIP report is supposed to leverage economic sanctions on countries that fall into the lowest rating category, Tier 3, because they do not meet the minimum standards of fighting slavery. But these countries, as well as most of the European Union, were given favorable ratings, despite the dearth of trafficking measures instituted by the country, a decision that reflected that the United States was not willing to jeopardize delicate political relationship for a justice issue. In effect, the U.S. State Department acted precisely as David Stern, sanctioning some trading but prohibiting others.

The NBA is scheduled to start regular season games on Christmas Day, mostly because nobody can afford to wait any longer. Governments have too many conflicts of interest to bring the necessary reforms, greed perverts the change that could come through local businesses and police forces, and the participation of slaves in their own bondage makes their plight difficult to classify with the parlance of centuries past, let alone elevate them to victim status in the eyes of judicial systems around the nations.

But there is in fact an even more simple explanation than all of this. The name of the problem is sin and it cannot be cured through policy, but only through repentance. Global trends in modern-day slavery will not be ultimately answered through democratic processes or diplomatic relations. Justice will only come through the Just One.

Bret Mavrich is a writer and missionary at the International House of Prayer in Kansas City, Miss., where he directs the Concentration in Justice Studies at the Forerunner School of Ministry. You can follow him on Twitter: @BretMavrich.

A Guide to Giving