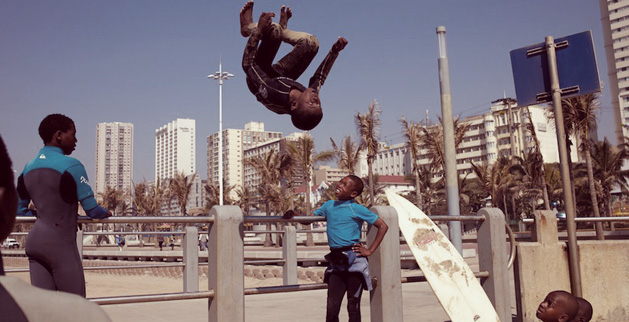 Nobody knows exactly how many children are living on the streets right now. UNICEF has estimated 100 million, but we can’t know for certain. We do know, however, that there are thousands and thousands of children and young people who call the street their home.

South Africa is one country struggling to cope with its homelessness problem. Racked by injustice and inequality, the chasm separating rich and poor is now exacerbated by the HIV/AIDS crisis. For many years, an apartheid ideology sought to create racial inequality, protecting it through arbitrary laws and policies. Today, the legacy of apartheid remains evident—South Africa is, apart from Namibia, the most unequal country in the world. Someone in the poorest 10 percent of the population has to work for 14 and a half years to earn what someone in the richest 10 percent could earn in only one. Children living on the streets are encountering this legacy every day. They remind South Africans that poverty, injustice and racial discrimination did not expire with apartheid’s demise.

Thousands of children live on the streets of South Africa today. Some have escaped abuse at home; others have been orphaned. Some will return home after a few weeks; others will stay here for years. Some are as young as 6 years old. Surviving on the streets is not easy; these boys and girls are innovative, charming and self-sufficient. Yet, even these skills are not always enough to survive. Every week, children are living and dying on the streets.

“One of the main problems here in South Africa is a ‘them and us’ attitude.” —Tom Hewitt

Many more kids may have died without the interventions of NGOs such as Umthombo, co-founded by a British surfer and his South African wife. Tom Hewitt, MBE, has spent the last 20 years working with street children in South Africa. He started out, during the apartheid years, living in a township, learning the local language and volunteering for an organization working with street kids. Today, he heads up an organization that employs former street children. Umthombo runs a number of specialist projects that support kids living on the street to enter employment, return to school and leave street life. Its flagship project—Surfers Not Street Children—is tackling addiction, prejudice and unemployment head on.

“One of the main problems here in South Africa is a ‘them and us’ attitude,” Hewitt says. Those with money, the privileged, tend to see themselves as “different” from the poor majority. They have grown tired of feeling unsafe due to high crime rates and have grown tired of seeing children begging at traffic lights. “I set up Surfers Not Street Children to challenge these attitudes,” Hewitt says. “For me, this project has combined my two great passions—surfing and helping street kids.”

Lucky Nozisali, now 20 years old, lived on Durban’s streets for more than a decade. He has thrived since getting involved in Surfers Not Street Children. He no longer lives on the streets, and he recently qualified as a lifeguard and works on Durban beachfront. He is also a brilliant surfer, sponsored by O’Neill surf wear and wetsuits and Gee-force Surfboards. This year, Nozisali also won the Jordy Smith Surf scholarship, which provides financial support for potential surfing stars from the world’s number-two surfer.

Nozisali is not the only one to have turned his life around so successfully. Forty-five children are currently involved in the program, and five of them recently won the South African Schools Surfing Champs (juniors) in Cape Town. No small feat, considering all five lived on the streets for a number of years. Surfers Not Street Children is slowly breaking down the “them and us” attitude, first amongst other surfers and now more widely. O’Neill sponsors some of the surfers; others work locally for surfing businesses, as diving instructors or teaching others to surf. “It is amazing how this project has caught the imagination of the kids,” Hewitt says. “I love watching them surf, knowing where they have come from. I love surfing alongside them too!”

Surfers Not Street Children is actively challenging some of the prejudices that many display toward these kids. It may be a drop in the ocean, but as we all know, the ocean is made up of drops. South Africa is a beautiful, yet traumatized, country. The scars of the apartheid era have not totally healed; out-of-date attitudes have not completely ceased. Inequality is keeping the poor trapped in poverty. As long as there is abject poverty and festering inequality in South Africa, there will be children and young people trying to survive on the streets. Yet, thanks to Umthombo and other organizations like it, there will also be increasing numbers learning to surf, breaking free from life on the streets by pounding the waves.

You can read more of Becca McGowan’s writing at her blog: www.astoryoffailure.wordpress.com

Indiana Jones and the Crazy Homage