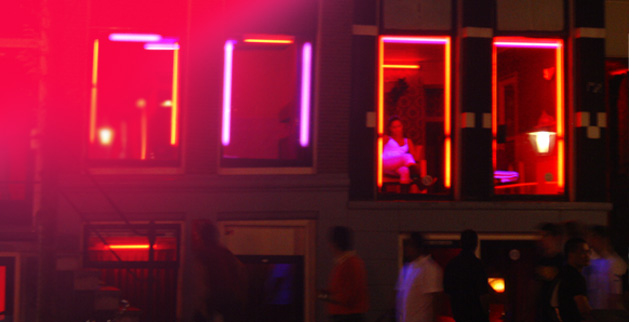 “Sometimes, I just wanna push ’em into the canals!” a volunteer laments guiltily. She’s just venting as we sidestep a bachelor party spilling down the Amsterdam street, confessing what most feel after even a short stint of working with the ladies—witnessing men carouse through the damp, erotically charged alleyways takes a toll on your faith in humanity. They tap on the glass, gather in packs to point, laugh and goad one another to be the first to pony up the 50 Euros and step through the red-rimmed door.

Melissa Gomez has been working with prostitutes since she was 18, her path shadowing the dark journey of countless human trafficking victims. She began in the Philippines, working at a recovery center for ex-prostitutes, where she watched her next-door neighbor’s 9-year-old son die slowly of AIDS as the local brothels thrived. When she left she told God that she wasn’t sure she was “cut out for this kind of work.”

But like most things that are hard to do but harder to walk away from, it had its hooks in her and months later, she was living in the Tenderloin in San Francisco. There, she realized that prostitution and trafficking were not only problems that happened “over there” but also here, in her state, openly. Joining a local NGO, she began staking out massage parlors and nail salons, documenting girls that went in but never came out.

The issues Gomez deals with every day—modern-day slavery, human trafficking, prostitution—have recently demanded broad attention with movements like Not for Sale and Stop the Traffic, and documentaries like Call + Response, Sex + Money and Nefarious. Human trafficking has become the new nonprofit and media buzzword. Youth groups and college campuses have jumped on board.

“Do efforts to make new laws take girls out of the windows only push them into back-alley brothels?”

Everyone can agree that something must be done to protect these women and children and reduce the international trade in humans, but few can agree how. Unfortunately, there is currently very little research as to the long-term effects of many of the policies that have been enacted. Do efforts to make new laws take girls out of the windows only push them into back-alley brothels where they become another disposable commodity? Do they ignore the humanity, the prostitute as a person, a survivor with few means? Are they only serving to alleviate our own sense of indignation? Or do they truly break a sanctioned system of modern slavery?

In 2006, when Gomez and her husband picked up their roots and replanted them in Holland, she jumped headfirst into a long-standing ministry called The Cleft. Visiting the “women in the windows,” as the local ladies of the night are called, volunteers with The Cleft offered them tea, cookies and friendship.

And that’s just it—if you were to see Gomez’s story on the big screen, you would learn that helping prostitutes is far from just campaign walks, brothel raids and covert sting operations. It’s trips to the doctor, late-night phone calls, disgusting stories of betrayal and coercion. It’s disappointment and sleeplessness. It’s wondering if the girls are OK, wondering if the men they slept with that day were nice to them, did they say mean things, were they polite. It means sacrificing your personal life to take on insomnia, depression, anxiety and bitterness.

All of these sacrifices would be easy to endure if every girl got out of the business, finding her freedom and being healed physically, emotionally and spiritually. And several of the girls Gomez befriended have moved on to other lives, working as checkers in grocery stores or going home and seeing the family that many times was used against them. But others don’t, or they do and then they go back. Gomez said she was prepared for this eventuality by working at the Haven; in instances of abuse it often takes the victim six or seven attempts to leave the perpetrator. “It’s never a good idea anyway to think anyone is going to stop work as a prostitute because you said they should,” she says. But when someone does make that choice and is wavering on her decision, she doesn’t just “welcome them back to the district and say, ‘It’s great to see you here again!’ ”

Gomez doesn’t insist that moving into the heart of the red light is the only way to make change—in fact, she emphasizes having a three-pronged approach: awareness, advocacy and response. Media coverage, lobbying politicians and bringing groups to witness on-the-ground realities all play a role in the fight. Without any one of them, the fight against sex trafficking becomes impotent: either irrelevant to the immediate needs of the girls on the street or merely serving as a Band-Aid to the ever-increasing flow of victims flooding the global market.

And in her work with the Lighthouse—a ministry that not only works with prostitutes in the red light but trains and educates internationals on the issues—she has led the charge in developing a program called SHINE for others like herself who want to be involved but don’t know where to jump in or feel overwhelmed by the complexity and cruelty of the issues.

Gomez said once that she didn’t like the term “anti-prostitution” because it has the words “anti-prostitute” in it, and she isn’t. For her, these women are more than just their day (or night) jobs—they are “beautiful and, apart from sex workers, I know them as women.” She and many more workers just like her will continue to support and love them, sharing Coco-Cola chicken and hopes for wholeness.

How Much a Lobbyist Is Really Worth

OMG, What Did You Say?