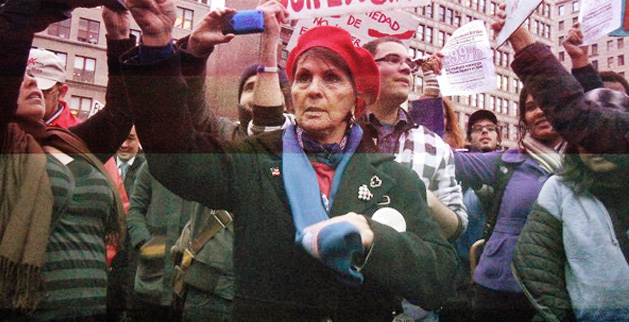 While it’s difficult to imagine that anyone would be inclined to pick up a clipboard and slap on a lanyard to take an actual, statistically sound census of the Occupiers across North America, it’s probably safe to presume their average age is not reaching far into the realm of the middle-aged. Although an occasional face that is wrinkled by age rather than rage can be found among the media images, mostly this type of uncomfortable, daily agenda-altering activism is considered the domain of the disillusioned youth and twentysomethings. It’s for the people missing midterms rather than mortgage payments.

The truth is—particularly in terms of engagement in international social justice issues—volunteerism and activism could be considered the domain of youth and the young. It’s nice to see old ladies knit teeny-tiny skullcaps for newborn babies in the hospital auxiliary or stepping up to take on the weekly delivery for Meals on Wheels, but to see the aged (or even the middle-aged) on the frontlines in international activism and volunteerism involved in anti-trafficking campaigns or global anti-poverty fundraisers is much more unlikely. For instance, the average age of a Peace Corps volunteer is 28, and only 7 percent of their volunteers are over the age of 50.

Motivation may provide a partial explanation for the why, says Jeffrey Noonan, head of the philosophy department at the University of Windsor. “I think young people may be more engaged because the young, by definition, have the most to lose or gain,” Noonan says. “Most people who end up dropping out of social justice movements as they become older do so because their material circumstances change. Most of the ones who keep fighting have very concrete reasons for doing so—to secure their own means of life. One could test this claim—although I have not done so. If it were true, one would expect to see more older people get involved as economic crisis threatens pensions, etc.” It’s not a particularly uplifting thought.

“I think young people may be more engaged because the young, by definition, have the most to lose or gain.”

Some professors and students from the University of Portland are studying the Occupiers, and one of the professors who leads the team, Renee Heath, has said that in the evening before a big rally, the demographics change considerably, because older participants head down to show support after work. This may just be a confirmation of Noonan’s hypothesis that when personal economic stability is threatened—the middle-aged and elderly are more likely to become at least partially engaged in activism. Marie Ens, however, would be Noonan’s anomaly, because when one factors in faith, everything changes.

Ens and her husband, Norman, had served the Cambodian refugee community in France as missionaries for many years, before Norman suddenly died in 1991 leaving Ens a 56-year-old widow. It was 10 years after his death, however, that she encountered real resistance to her anti-retirement plan. “I had turned 66, and was emphatically urged to retire and return to Canada,” Ens says. “Unlike when I returned in 1994, when I was part of a missionary organization, now I would be returning on my own to live and work in Cambodia supported by my own pension funds. This was a bigger decision than the one in 1994. It required a lot of prayer and reflection, but in the end, I could make no other choice. My whole heart wanted to continue to live and work in Cambodia, and I felt God was not finished using me here yet.”

She says she had no idea her best years yet lay ahead of her. “What has developed over the last eight years since we formed the NGO Rescue in Cambodia is absolutely phenomenal,” Ens says. “In 2002 we had 16 small homes for families living with AIDS In 2004 we put our first children, orphaned by AIDS, into the first orphan home. Now in 2011, we have four properties and are caring for more than 400 children in addition to AIDS patients, elderly destitute women and young women who have been seduced or raped. My life could not be happier and more fulfilled.”

She said returning to Cambodia in 2000, though, she met with unexpected opposition. “The mission leaders whom I respected and some of my family whom I loved did not agree with my decision and were concerned for me coming to Cambodia alone and unsupported,” she says.

“My whole heart wanted to continue to live and work in Cambodia, and I felt God was not finished using me here yet.”

Of course, not all “mature” volunteers are quite as enthusiastic about forsaking family and familiarity—even for a short time—to cross countries or continents. When 65-year-old criminal court judge Sherry VandeVeen boarded a plane bound for Bolivia with a small delegation from International Justice Mission, she says it was her faith that prompted her on. “I didn’t want to go to Boliva. I like my comforts, and I just don’t do things like that. I’m the kind of person who has to be dragged out of the country, because I just don’t find travel outside of the country that titillating, and the needs here are enormous.”

Her actions belie her words, however, as VandeVeen is quick to admit she is definitely rethinking her retirement plans. “I definitely saw more younger people engaged in social justice when I was there, and I realize that we older professionals have a lot of wisdom and experience to bring to the table even if we don’t have the energy we used to have,” VandeVeen says. “Who wants to quit life when they retire? I think instead of considering this stuff the domain of the young, we need to work with them to leverage their energy and make use of our experience.”

So while the face of international activists tends to be little more Justin Bieber-ish and a little less Kathy Bates-ish, there is hope that this may slowly be evolving as seniors explore their options in activism living longer and healthier lives and witnessing the involvement of their peers. “I certainly try hard to interest my peers,” Ens says. “I feel strongly that retirement should not be an option for anyone and that everyone should continue to be as involved as their health and finances permit. Happiness and contentment and fulfillment only come when we give our lives away to serve the needs of others.”