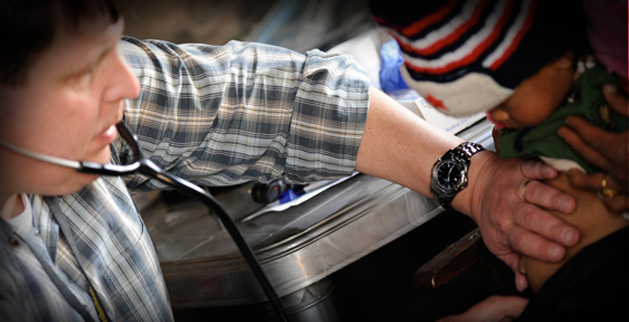 The HIV/AIDS epidemic affects millions around the world, but offering HIV testing and education on short-term medical outreaches around the world can play a significant role in the fight against the global AIDS crisis.

HealthCare Ministries (HCM), based in Springfield, Mo., is a compassion ministry that conducts medical evangelism outreaches in conjunction with Assemblies of God missionaries all over the world. HCM sends teams of volunteer health care professionals to treat people with medical, dental and optical needs. They also have specialty teams for disaster response and health teaching.

Addressing the worldwide AIDS crisis is a crucial component of HCM’s vision to bring “His hope that heals” to the spiritual, physical and emotional illnesses of all people. AIDS intervention helps prevent the spread of the disease and is also an open door to treat the spiritual condition of an individual. “In areas where we are permitted, we can tell them of a God who loves them and how to know where they will spend eternity,” says Dr. Deborah Highfill, HCM’s director.

Regardless of the outcome of an HIV test, HCM is able to care for the individual. If the patient tests positive, HCM can give instruction to prevent the further spread of the disease, as well as provide ways to help the person and family cope with the disease. “Additionally, if they are HIV-negative, then we can talk to them about their ‘second chance,’ ” Highfill says.

HCM began including HIV testing in outreaches during a short-term clinic in Côte d’Ivoire in 2002. The outreach was part of a bigger children’s health fair. “We were not certain that anyone would come for testing, but we were wrong,” says Karen Herrera, HCM’s field ministries area leader. Many people came for testing and weren’t as worried about confidentiality as the team had anticipated. Since then, HIV testing has been a regular service offered during outreaches in countries that have a 5 percent HIV-prevalence rate and in countries that are reporting large rate increases.

Typically, the team sets up a private area within the clinic layout and an R.N. administers the rapid HIV test. The medical examiner will often refer patients to the HIV testing area if they observe symptoms or if the patient specifically requests it.

Prior to an outreach, HCM’s host missionary will connect with the local HIV/AIDS clinic so the team can send those who test positive to start antiretroviral treatment (ART). Often, HCM will ask the staff to assist in the outreach in order to build rapport and establish a connection with the community.

While there are many barriers to being tested—refusal to change lifestyle, rejection or fear of stigmatization—HCM still encourages testing to help improve a patient’s quality of life.

Along with testing, HCM provides HIV/AIDS education during outreaches. Educating patients on prevention and care is essential to leave a long-term impact when the clinic is finished. “HIV/AIDS education is vital, since in many countries the people are not given accurate information and in some locations there is not an attempt at providing this information,” Herrera says.

Education on this subject is needed in every country of the world. It isn’t just a sub-Saharan Africa problem; countries such as China, Russia, India, and Jamaica are seeing AIDS grow at a rapid rate. “The knowledge about HIV/AIDS is very limited in most areas outside of Africa,” Herrera says.

HCM uses the resources available through Global AIDS Partnership (GAP) to inform and educate during outreaches. GAP is an Assemblies of God World Missions ministry that provides teaching materials for those who minister to people affected by HIV/AIDS. While patients are waiting in line, a team member will teach on AIDS awareness and prevention.

HCM’s involvement with HIV/AIDS education isn’t limited to medical outreaches. They also send specialty teams at a missionary’s request to do education seminars in churches, communities, and Bible schools. “People trust the information that we give since we are medical professionals,” Herrera says, “and we identify the importance of empowering people with knowledge so they can protect themselves.”

Investing in an End to Poverty