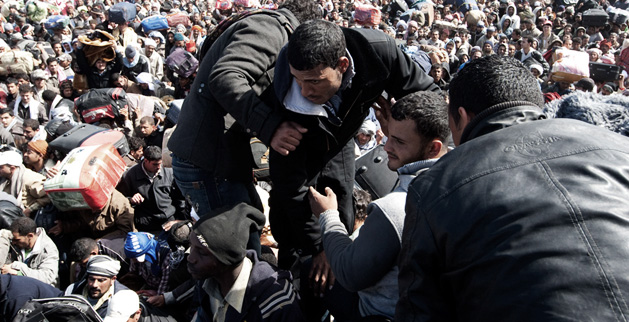 After the fighting started, Sarah* tried to keep up a strong front. She continued going to English class (she was my student a couple of times) and did her homework to the best of her ability. But then she began to hear stories about her family—stories about a handicapped cousin who was captured and tortured by Gadhafi’s forces, stories of gunfights just outside her family’s home, stories of loved ones who died in the civil war that erupted in Libya.

It became harder to go to class. She was supposed to start grad school in the Fall, but on the day she took the GRE, Sarah was on the verge of an emotional and nervous breakdown. Her score was an obvious reflection of the turmoil raging within her and within her country. Her English grades were almost non-existent because getting out of bed in the morning had become a monumental task. Sarah, the Libyan scholar, had become a refugee.

Sarah’s experience as a displaced person is more common than is often realized in the West. The UNHCR (United Nations High Commissioner for Refugees) reports that by the end of 2010 almost 44 million people worldwide woke up each day as people without homes. A little context: if all of the people living within New York City, Los Angeles, Chicago, Houston, Philadelphia, Phoenix and San Antonio woke up as refugees tomorrow morning, they would represent about half of the world’s refugee population.

It’s easy to feel pity for 44 million people, even if they seem distant or nebulous. It’s also easy to feel paralyzed by the overwhelming amount of human suffering and destruction that these 44 million represent. But what if the world’s refugees represent something beyond pain and brokenness? What if they also paint a tangible picture of our call as Christians?

Throughout Scripture, God places a high priority on refugees, sojourners, widows and orphans—essentially anyone without a home has a special place in His plan. In the Old Testament, Yahweh elevates the protection of “aliens” to law: “Do not mistreat an alien or oppress him, for you were aliens in Egypt” (Exodus 22:21). His care for them runs deep: “The Lord watches over the alien and sustains the fatherless and the widow” (Psalm 146:9). In several instances (for example, Abraham, Ruth and David) He even directs His servants to voluntarily submit to the unknowns of displacement, homelessness and exile.

Then in the New Testament, the picture becomes even more clear. Jesus frequently lived as a man with no home and on one occasion told a potential follower that, “Foxes have holes and birds of the air have nests, but [I have] no place to lay [my] head” (Matthew 8:20). To another disciple-hopeful, who had kept the Hebrew law to the letter, Jesus said, “One thing you lack … go, sell everything you have and give to the poor, and you will have treasure in heaven. Then come, follow me” (Mark 10:21). This man was sad, Mark reports, because Jesus was asking him to willingly give up his possessions, his home, his security. Only then would he be able to respond to Jesus’ invitation to come and follow.

It is of course true that people with homes and possessions can use those things in ways that make a Kingdom kind of impact on the world. There are many examples of this also in the Scripture. Lydia, a rich woman of Philippi, opened up her home to Paul and Silas (Acts 16) and Boaz invited Ruth and Naomi into his home and vast possessions (Ruth 4). This is a great and wonderful picture of hospitality and provision for the needy.

What isn’t seen in Scripture, however, is the option of being a follower of Jesus and remaining unaffected and uninvolved in displacement and exile. The examples that are always upheld as good and beautiful images of Redemption are submitting to the unknowns of homelessness as a visible picture of the search for our true Home or unreservedly inviting the refugee to partake in our material possessions.

As American Christians, we have a long ways to go on either front. How many of us have actually submitted to leaving our homes and possessions to live a life of simplicity and commitment in order to go wherever He sends us? Peter goes so far as to say that we are aliens and strangers in the world (1 Peter 2:11); what does it mean to match our spiritual reality with our physical reality? When I was in college, my mentor had us participate in a Refugee Weekend; the (Christian) college administrators were reluctant to give him the green light but eventually agreed. That weekend was one of the most traumatic and transformative experiences of my life—and I knew that being a refugee would end after two days. Most displaced persons have no idea if or when their lives will have any sort of security, yet many of them have stronger ties to faith, community and solidarity than most of us could even dream. Watch Lost Boys of Sudan to get a taste of this; then pray about what it may mean to have no place to lay your own head. Let’s not let the weight of being aliens and strangers slip out of our grasp.

On the other side of the coin, most of us have an abundance of possessions and certainly if you’re reading this, you have access to Internet and most everything you need. What does it look like for us to intentionally invite displaced strangers into our homes and the things we own? Even though Pakistan, Iran and Syria all house more refugees than America, there are still many thousands who have crossed our borders and live in many of our cities. Many of them live near each other in apartment complexes, and many of them have no real connection with American society or the American body of believers. But there are opportunities to be instruments of reconciliation in the lives of these refugees; many cities have established nonprofits that provide ways to volunteer and welcome refugees into our American home. PAIRHouston and the IRC in New York are just a couple.

Sarah’s story is one of heartache and psychological torment. And her story is replicated millions of times over every day. But Sarah’s story does not have to end in despair, and our stories do not have to end in regret and waste: “For whoever wants to save his life will lose it, but whoever loses his life for Me will save it. What good is it for a man to gain the whole world, and yet lose or forfeit his very self?” (Luke 9:24-25)

The giving up of our spiritual and physical lives will be uniquely painful and beautiful for each of us. But the saving of our lives and the lives of those we identify with will be the most glorious masterpiece yet.

*Sarah’s real name has been changed to protect her identity.

The Give and Take of Missions